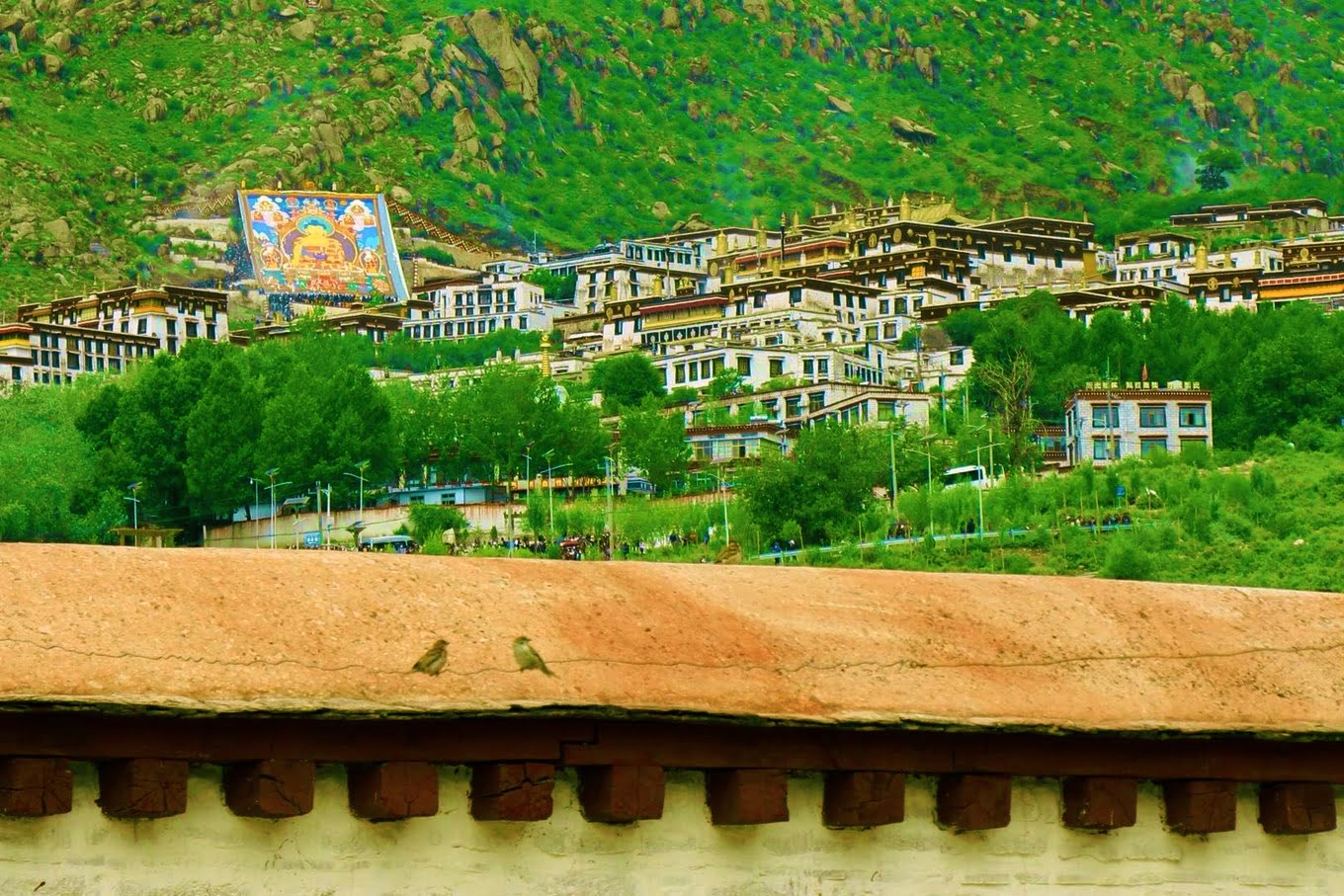 Drepung Monastery lies in west of Lhasa under Mt. Gambo Utse, clustered round by the black mountain, its white grand buildings shining under the sunlight. Built in 1416, it is considered as one of the largest monasteries in the six principle monasteries of Gelu Sect in Tibet. Drepung Monastery used to be the living palace of Dalai Lamas before the reconstruction of Potala palace.

Drepung monastery was founded in 1416 by a disciple of Tsong Khapa, Jamyang Choeje.

Jamyang Choeje was born in a poor family in Lhoka, Tibet. He studied hard in his childhood, and later became a disciple of Tsong Khapa specializing in sutra, and at last became well-known for his mastery of Xianzhong, Esoteric sect. In order to spread abroad the tenet, Tsong Khapa entrusted him to build a grand monastery and presented him a lucky symbol: a conch shell. Under the patron of a noble family, Jamyang Choeje started to build this monastery in 1416. The monastery was named “Palden Drepung” which means Rice Heap in Tibetan. After its construction, Jamyang Choeje was appointed as the first tripa (throne holder). There are 23 tripas together. In 1464, colleges were set up to teach tantra in this monastery.

Drepung monastery is called the original monastery. for it has been the living place of the first, second, third and forth Dalai Lama. The second Dalai Lama built a palace（named Gedanpozhang）in this monastery where he took over the administrative power of Tibet.

The third Dalai Lama was invited here as the first living Buddha in Drepung monastery, who later went to Qinghai to sermon after Andahai (the leader of Mongolia) invited him. In Ming Dynasty, the 6th year of Yong Le, Andahai bestowed the honor name “Sheshiyiqianwaqierdalaierlama ” which bought the saying of Dalai Lama into being. After he got this honor name, he admitted posthumously the former two with the fist and second Dalai Lama. And the fifth Dalai Lama also lived there until he received the appointment of Qing Dynasty.

Drepung monastery is called the original monastery of Lamaism for its most honorable status and deep influence. Ganden Potrang Palace (one of the palace in Drepung monastery) is also thought of the place where Gelug took the administrative power of both Lamaist sect and local area, because it has been the living place of the second, third, forth and the fifth Dalai Lama

The main structures of the monastery include the Main Assembly Hall (known as Tshomchen), four Tantric colleges and Ganden Palace (Ganden Potrang).

Walk along the west stair of Drepung monastery and you’ll find a three-storeyed palace with flowered windows, this is the famous Ganden Potrang. It was built in 1530 by the 10th tripas during the time of second Dalai Lama. Before the fifth Dalai Lama received the appointment of Qing Dynasty, this palace used to be the living palace of Dalai Lamas from the third to the fifth.

Tshomchen, covering 4,500 square meters and supported by 183 pillars, is located at the center of the monastery. In the hall, there are a lot of Thangkas, murals that make a religious and mysterious atmosphere. And there are many lifelike statues of religious figures, such as Tsong Khapa and his two disciples and so on. In the front of the hall, a conch shell is worshiped with an important status. It was said that it was once used by Sakyamuni and was hidden at Mt. Gambo Utse. Later Tsong Khapa discovered it and bestowed it to his disciple to be the monastery’s treasure. And silver tombs for Dalai Lama second, third and forth were worshiped in the rear of the palace. Upstairs, a collection of valuable scriptures is kept.

There are four Tantric colleges, which are Loseling College, Ngapa, Rongyangzachang(Xian and Mi sets of Buddhism), Abazachang(Mi sets of Buddhism). Each of them has a chanting hall, and its own monks that can’t mix with others. Each college has strict study system which requires studying together 8 times in a year, which means every 15 days to a month once. The monks learn Tantra by recitation and debating. Before the graduation, they have to take the examination held by Kabu, who will give them different rank according to their mark. The excellent would take part in the Buddhist service and be given a highest degree of Gexi.

Visitors will find many great cultural relics in this monastery.