Immediately after China’s second domestic railway Sichuan-Tibet Railway connecting Sichuan and Tibet This railway is constructed from both ends to the middle.

On June 17, the State Council Information Office held a series of provincial (district, city) press conferences. Peng Qinghua, Secretary of the Sichuan Provincial Party Committee and director of the Sichuan Provincial People’s Congress Standing Committee, promoted the new development concept to promote the governance and prosperity of Sichuan. “Introduction.” Focusing on the issue of the construction of the Sichuan-Tibet Railway, which is concerned by the outside world, Peng Qinghua said that as an unprecedented century project, the Sichuan-Tibet Railway Ya’an-Tibet Linzhi section will soon begin construction.

In the past 70 years, Sichuan’s modern comprehensive transportation system has become more and more perfect, and it has become a history. Before the liberation, Sichuan’s infrastructure was very backward. There was no operating railway. The total mileage of the road was only over 2,000 kilometers and the grades were very low.

At present, Sichuan Province is building a “four-way eight-bay” comprehensive traffic corridor and a foreign economic corridor. It has built 31 large and small channels into and out of Sichuan. The railway has a mileage of 4,970 kilometers. The number of Central European trains from Chengdu has reached more than 3,500, ranking the whole country. The head of each city;

The total length of highways exceeds 330,000 kilometers, of which the expressway mileage is 7,238 kilometers, ranking first in the country. At present, the Sichuan railway construction is welcoming a peak period.

Peng Qinghua introduced that the Sichuan-Tibet Railway, which is of great concern to the outside world, is about to start construction. It can be said that this is an unprecedented century project.

Now, the Sichuan-Tibet Railway from Chengdu to Ya’an has been opened to traffic, and the Lhasa-Linzhi section is under construction. The next step is to build from Ya’an to Linzhi, about 1000 kilometers, more than 90% of bridges and tunnels, including seven or eight hundred kilometers inside the tunnel, more than one hundred kilometers on the bridge, and maybe only on the ground. Dozens of kilometers.

After the completion of this railway, it will greatly enhance the status of the transportation hub in western Sichuan.

The Sichuan-Tibet Railway starts from Chengdu in Sichuan Province, westward to Ya’an, Kangding, Chamdo, and Linzhi to Lhasa. The route passes through the Sichuan Basin, the Western Sichuan Alpine Canyon Area, the Western Sichuan Alpine Area, the Southeastern Hengduan Mountains, and the Southern Tibet Valley. It has successively crossed the Dadu River, the Yalong River, the Jinsha River, the Lancang River, the Nujiang River, the Yigong Zangbo, and the Yarlung Zangbo River. The terrain is high in the north, low in the south, high in the west and low in the east. It is recognized as the “most challenging railway project”.

The overall situation of the Sichuan-Tibet line

The Sichuan-Tibet Railway is known as the “Century Project” and is a fast railway connecting Sichuan Province and the Tibet Autonomous Region. It is one of the trunk railways in southwestern China, with a total investment of over 200 billion.

The Sichuan-Tibet Railway starts from Chengdu in the east, passes Ya’an, Kangding, Litang to Tibet’s Qamdo, Bomi, Nyingchi, and finally to Lhasa. The design speed is 200 km/h, and the speed limit of some sections is 160 km/h. After completion, the journey time from Chengdu to Lhasa will be shortened to about 13 hours.

The Sichuan-Tibet Railway consists of three major sections: the Chengkang Railway (Chengdu to Kangding, including the Chengya Railway and the Yakang Railway), the Kanglin Railway (Kangding-Ningzhi), and the Lalin Railway (Lhasa-Linzhi). The Chengkang section started construction at the end of 2014, and the Chengdu-Yaan Railway was officially opened on December 28, 2018. 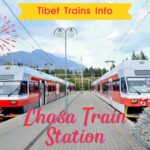