Though there are trains bound for Lhasa from Beijing, Shanghai, and Chengdu, the genuine Qinghai-Tibet train starts from Xining. It takes approximately one day distance from Xining to Lhasa. Each year there are around one-quarter of tourists who may take the train to Lhasa from Xining.

The Z6801 is the only train that starts directly from Xining and arrives in Lhasa. Z6801 departs from Xining every other day at 14:01 from Xining Train Station and arrives at Lhasa at 11:10 on the second day. The train running from Xining is pressurized, supplied with oxygen altimeters, and sealed. The windows have ultraviolet filters to protect passengers from UV radiation. Here is the most up-to-date information on Xining Lhasa Train for 2018.

Xining is the initial train station of Qinghai-Tibet train closest to Lhasa. The entire train ride only takes one day. The tourists get on the train and the next day they will be on Qinghai-Tibet plateau, enjoying the breathtaking scenery through the window of the train.

There are over 3 trains bound for Lhasa from Xining bringing more than a thousand tourists to Lhasa on a daily basis. Its transportation capacity is three times more than the Beijing-Lhasa or Shanghai-Lhasa train. The peak season of the Qinghai-Tibet train comes in summer. At that time, the train ticket could be hard to buy. Yet, if tourists can start their journey from Xining instead of Beijing or Shanghai to Lhasa, it can be much easier to buy Qinghai-Tibet train tickets.

2. If you want to buy a train ticket, you can buy online. After wandering around Qinghai Lake and Kumbum Monastery. you can go to Golmud and take the train to Lhasa. It’s better to go direct to Lhasa. Arrange your place and find a travel agency to sign up for a one-day or two-day trip to Namtso lake. This is more convenient and easier than what you expected

3. Several stations along the Qinghai Tibet line are actually meaningless. When the train passes through Kekexili and Nyanchen Tanggula, it’s interesting to look for Tibetan antelope through the window and have a look at the snow scenery.

In Lhasa, you can visit the Potala Palace, Jokhang Temple and Barkhor street. you can go to the Drepung temple and walk along the Lhasa River in the evening. It will be very comfortable!

Outside the city lies the Qinghai Lake, with the famous Bird Island in the northwest of the lake. The island is small but becomes the home to millions of migratory birds twice a year. It makes an excellent place for birdwatching and seeing several rare species of non-native birds.

Aside from the amazing scenery that can be seen along the Qinghai-Tibet Railway. There are many other attractions for foreign visitors to Xining. As the east gate of the Qinghai-Tibet Plateau, Xining has many top attractions to keep you busy while visiting the city. In the southwest part of the city is the Ta’er Monastery. One of the six Great Monasteries of the Gelugpa Sect of Tibetan Buddhism. In the Xining city zone, there is the 600-year-old Dongguan Mosque, one of the most famous mosques in China. It is big enough to hold over 300 Muslims in prayer.

How to Get to Xining Train Station?

The station at Xining is the most popular, and busiest, of all the stations sending trains to Lhasa. It is the start of the Qinghai-Tibet Railway and a stopping point for every single train that travels to Tibet. In addition, with 4-5 trains every day to Lhasa, it is much easier to get tickets for the trip. 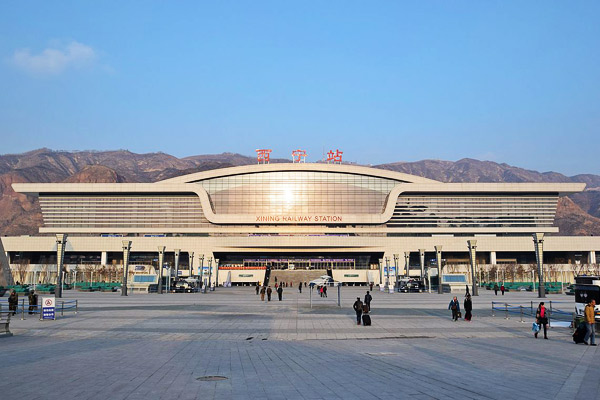 The station is located on Huzhu Road, in Chengdong District, and reconstruction was completed on the station in 2014. The new station is divided into the main station building and two outer squares. The building is made up of three levels, with a ticket hall, regular waiting rooms, soft sleeper rooms, VIP waiting areas, and a full market. Majority of the waiting halls are on the second floor, with departures on the ground floor and arrivals at the underground level.

Getting to the station is easy from anywhere in the city. It costs around CNY10 for a taxi from the city centre or CNY1 for a bus ticket. From the airport, it is a little harder to get to the station. There are no direct shuttles and passengers need to ride the shuttle to Bayi Road Xining Airport City terminal.  The shuttle takes around 40 minutes and costs CNY25, while the taxi part of the trip is just 3klm and costs only CNY10.

What sort of window view do we expect to see on Xining Lhasa Train?