If you are looking to play with pandas while in China, then your schedule needs to include a visit to the 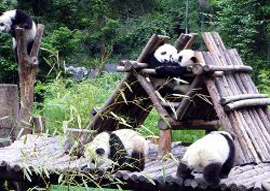 Through artificial insemination and rescuing wild pandas, the Wolong Natural Reserve has over 67 pandas which it uses to increase the population and research the pandas. Today, there are approximately 1,000 pandas in the wild, which makes them one of the most endangered animals in the entire world.

Yet, almost everyone can recognize the trademark look of the giant panda. With their black and white fur and lazy ways, even the largest panda can appear cuddly as you watch it each bamboo shoots, which are one of their favorite foods, for a meal during the day.

In general, you will find three types of giant pandas in China’s Wolong Natural Giant Panda Reserve. The first type of giant pandas is those were raised from captivity. The second are those ready to be released back into the wild. The last are those who have been separated from their group, who are injured, or who are unable to survive the wild on their own. 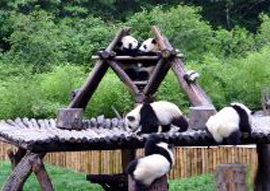 Most recently, the Sichuan Earthquake, which occurred next to Wolong, greatly affected the Wolong Giant Panda Reserve. As such, you should always check with the reserve before planning your visit to determine whether or not your timing is appropriate for the well-being and research of the animals. Still, on almost every occasion visitors are welcome to watch the largest group of pandas in China.

Since the center for endangered pandas in China was not created to be a zoo or a tourist attraction and therefore should be treated as the research environment that it is. But, that does not mean that you will not get the opportunity to help a researcher feed or play with some of the pandas.