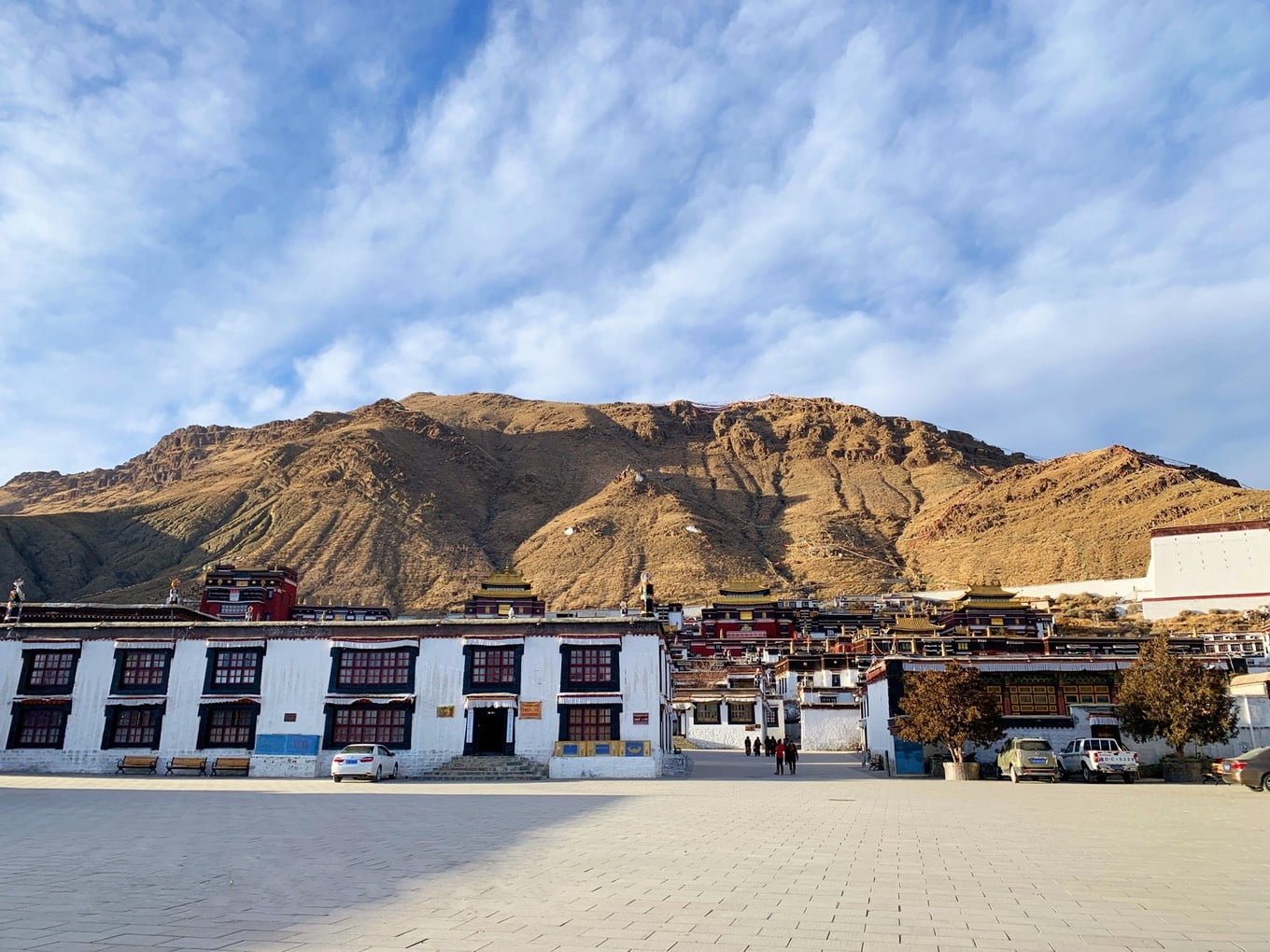 Tashi Lhunpo in Tibetan, it means auspicious giant Monastery. It is the largest temple in Shigatse area. It is listed as the six largest Monastery of Gelug Sect along with Drepung Monastery, Sera Monastery and Gandan Monastery in Lhasa, Kumbum Monastery in Qinghai and Labrang Monastery in southern Gansu.

The Monastery was built in 1447 under supervision of the first Dalai Lama Gedhun Drupa, one of the disciples of Lama Tsongkapa. Later it served as the residence for Respective Panchen Lama.

There are four Dratsang and 62 Khamtsen (base on area), and nearly 60 Buddhist halls and pagodas.  There are the Tsokchen hall, the four Dratsang, the Panchen Labrang, the Jampa Buddha Hall, and the Panchen lama pagoda worship hall. 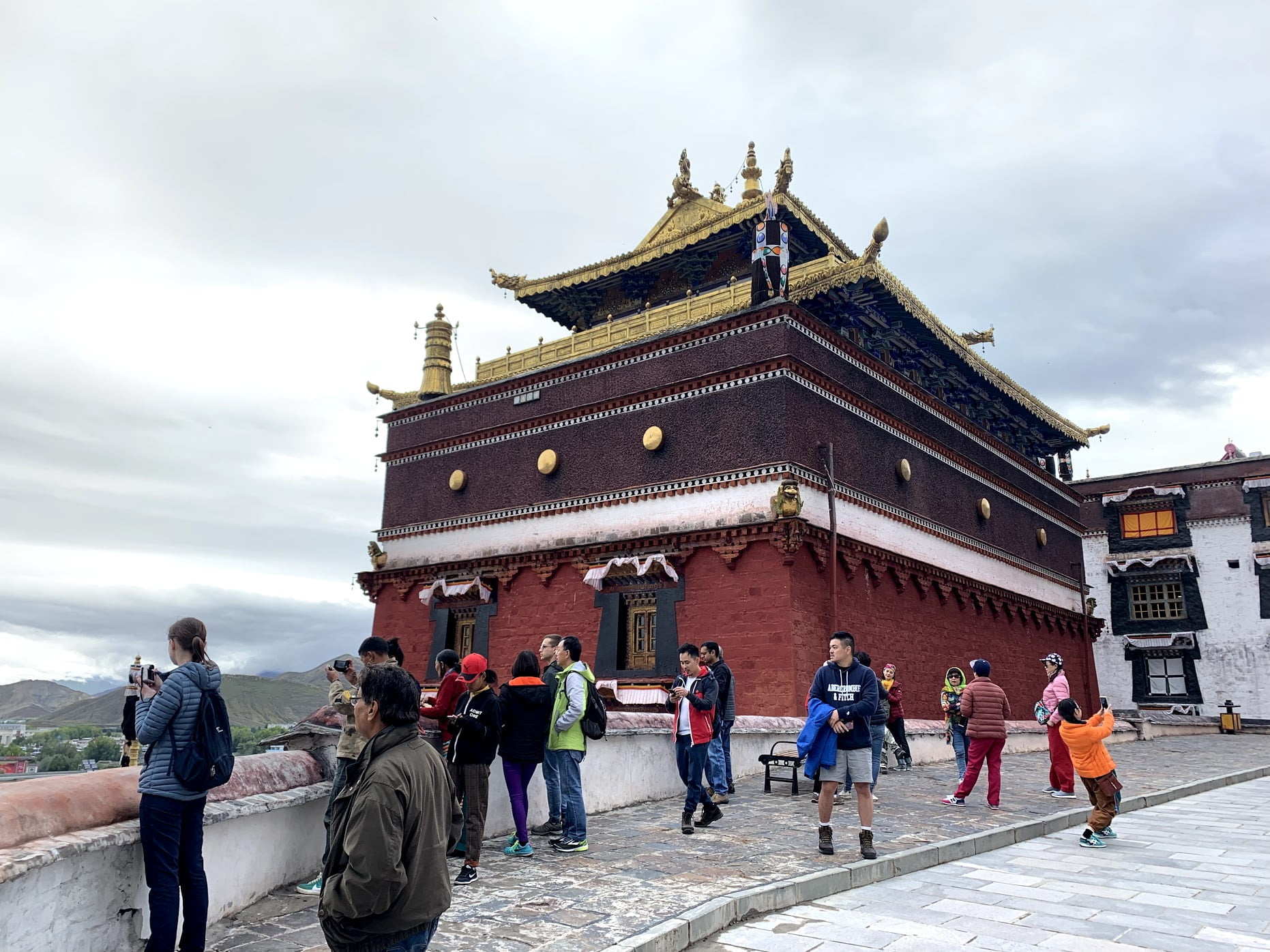 The main hall of Tsokchen is the earliest building of Tashi Lhunpo Monastery. The hall is about 500 square meters. There are 48 pillars in the main hall, which can hold more than 3000 people. It is the centre of the whole temple’s ritual activities. In the north of the hall, there is a Buddha statue of Sakyamuni created by Gendun Drubpa to commemorate his Sutra master Sherab Sangey. In the middle of the hall, there are three statues of Lama Tsongkhapa.

On the right side is the big hall of Jampa Buddha, in which there are 11 meters high statues of Gyalwa Jampa Gonpo. On both sides are the statues of Chenrezig and Manjusri made by Yishi himself. On the left is the hall of Dolma, in which there is a gilded White Tara statue. In the west of the hall is the Dharma protection temple, with Gonpo, Tsangapa and Palden Lhamo.

One of the four big Dratsang, is mainly used for wall portraits of Lama Tsongkhapa, gold-plated bronze statues of Sakyamuni and six-armed patriarch. There are 24 pillars in the main hall of Dratsang. There are statues for Sakyamuni and his eight Boddhisatva.

There are 24 pillars in the main hall of Thoesamling Dratsang, which are divided into East and West Chapel. On the west side, there are Buddha statues of Sakyamuni, 11 head Avalokitesvara, Vajrapani, etc. On the east side, there are three statues of  Buddha from past, present and future.

Ngaba Dratsang is the esoteric School of the whole temple, which was built in 1615 by the fourth Panchen Lama. There are as many as 16 columns in the Sutra hall. There are many murals on the inner wall. In Sutra hall have the throne of Vajra guru and the Silver Pagoda of Kunchok Gyaltsen.

As Tashilhunpo monastery is Residence of Panchen lama. There are four palaces in the Monastery. 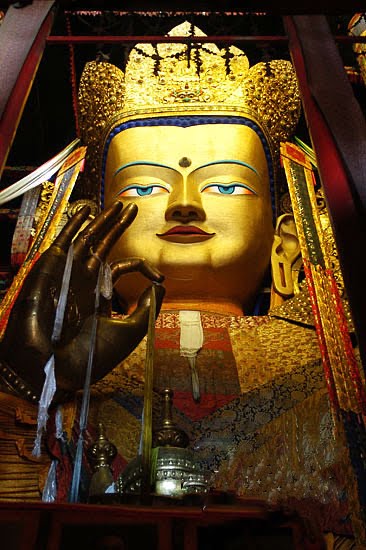 It was built in 1914 by the ninth Panchen Choekyi Nyima. The hall is 30 meters high with a construction area of 862 square meters. The hall is divided into five levels: lotus seat hall, waist hall, chest hall, face hall and Crown hall, which are ascended by a wooden ladder. 8928 grams of gold and 231450 kilos of red copper were used. The statue is 26.7 meters high. Its face is 4.2 meters wide, the ear is 2.8 meters long, the hand is 1.6 meters wide, the hand is 3.6 meters long, the foot is 4.2 meters long, and the shoulder is 11.5 meters wide. The white hair inlaid between the eyebrows of Buddha statues only uses one extra-large diamond with a diameter of 3cm, 32 diamonds with a diameter of 1cm, more than 300 large pearls, and more than 1400 amber, coral, loose ear stone, etc., which shows the cost and technological level.

In addition to holding rituals on auspicious days such as the 8th, 15th and 30th of each month in the Tibetan calendar. Tashilhunpo Monastery also conducts rituals on the other Buddhist festivals like great Monlam Festival, the Saga Dawa, the Lhabab Duechen and Ganden Ngamchoe on 25 of the tenth month.

Praying for the prosperity of Buddhism and the peace of all living beings. The most distinctive festival of the temple is “Sermo Chenmo”, which is similar to the “Shoton Festival” in Lhasa and is also a festival for monks and common people to celebrate.

In addition to the valuable Buddha statues, pagodas, thangkas and so on, there are also handwritten leaf scriptures and “Kagyur” and “Tengyur” written in gold ink. In addition, there are all kinds of porcelain, enamel, glass etc. All these are priceless treasures for studying the political, religious and social development of Tibet in various historical periods.

In addition, the murals of Monastery are also very distinctive, with various forms, brilliant colours and exquisite brushwork, which is another masterpiece of Buddhist art.

The Panchen Lama’s Palace that stands nearby the Stupa-tomb is a grand white palace mainly built during the reign of the Six Panchen Lama (1738-1780). It is not open to tourists and local visitors alike.

The Great Courtyard of the Kelsang Temple is the place for lamas to practice and debate. The wall around the courtyard is covered by thousands of images of Sakyamuni in different postures and expressions.