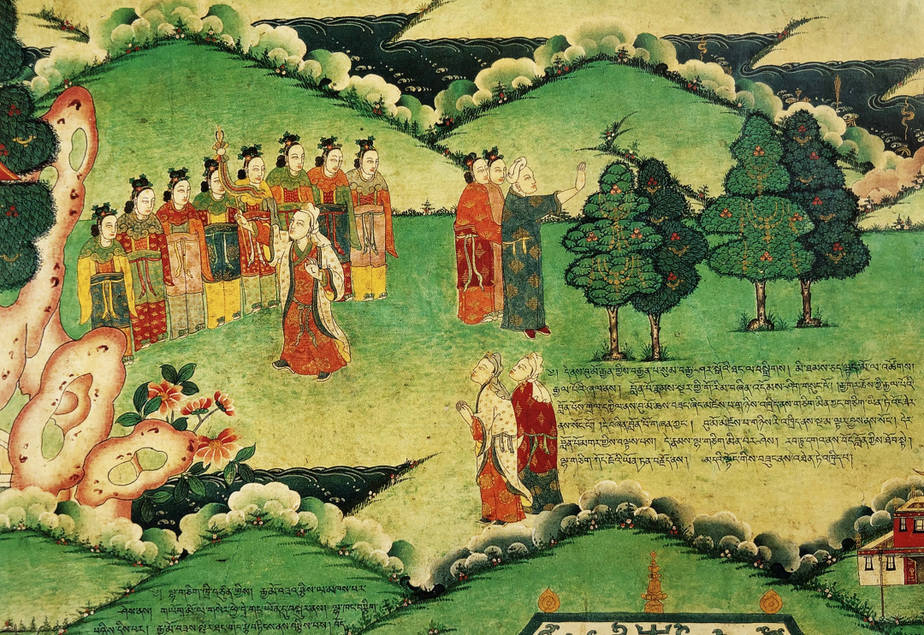 Princess Wencheng, the fourth wife of Songtsen Gampo has very harsh life. Historically, too many people have had extremely tragic fates, especially those born into the royal family. As a member of the royal family, from birth is doomed to a great responsibility, the emperors want to think for the national community, and some even year-round hard to stay on the sidelines. Women don’t have to go to war, but they also fall victim to a stable life in the country.

In the article recorded in the Tang Dynasty, it said that Princess Wencheng’s life in Tibet was quite happy. But in reality, it is opposite. Based on Dunhuang Mogao mural,  Princess Wencheng experience very harsh life after her arrived in tibet. Because Songtsen Gampo, who was always busy with war and politics. He also had lot of local wives. Most time he enjoy accompany of local beauties. Princess Wencheng spent a very lonely life in Tibet.

In addition, Songtsen Gambo did not hesitate to spend a huge amount of money on the construction of Jokhang Temple. To enshrined the 8-year-old figure of Sakyamuni brought by Princess Tritsun from Nepal. Although Princess Wencheng from Changan brought the statue of 12 years old Shakyamuni, but Songtsen Gampo only built a small-scale Temple for her to place it.

This shows the difference status of two princess. Later, Princess Jincheng entered Tibet as the wife of the emperor Me Agtsom of Tubo, and exchanged the two Buddha statues, which has continued to this day.

In fact, Princess Wencheng has been in Tibet for many years, but she has no child, no favors, and mediocre status. She usually serves Songtsan Gampo’s diet and daily life like a maid, which is very different from the image of the lofty, noble and respected as we see now. Princess Wencheng stayed alone for 31 years, living in solitude.

In addition, when Princess Wencheng married away, the Tang Dynasty also gave a lot of things unique to the Central Plains as dowry, not only gold and silver jewelry, silk, but also crops. The people in Tibet at that time feel dissatisfied with princess, which can also be seen from the murals.

Based on these murals and the character of Songtsen Gampo, the fate of Princess Wencheng recorded in history is wrong. As for why it was written like that, perhaps it was for the sake of Li Yuan or to make a good impression on future generations. No one knows what the truth is. The fate of Princess Wencheng is tragic. She is also a representative of many women born in the palace. who destined to be a victim at birth, unable to enjoy the happiness of ordinary people.

Regarding Princess Wencheng marrying away in Tibet, People still admire her. Whether she willingly marries away to Tibet for the sake of the country, it is not easy for her to survive in Tibet for so long.

On the one hand, Tibet and China have different climate and dietary habits. I don’t know how she can stand it. Even now Chinese people arrived in Tibet, they still have to use drugs to drive away altitude sickness, not to mention that there was primitive society at that time!

On the other hand, it is said that “a married daughter is like water poured out”. Princess Wencheng, who was married to Tibet, has no backing. She is not a true wife in Tibet, nor is she a favored concubine. It can be said that she is helpless. How can she endure the days of being at the mercy of others?

The method of ‘marriage alliance’ was sometimes a good method in the society at the time. After all, it is better to sacrifice one person for the stability of everyone than to fight a war. However, this is also unfair to the individual people.