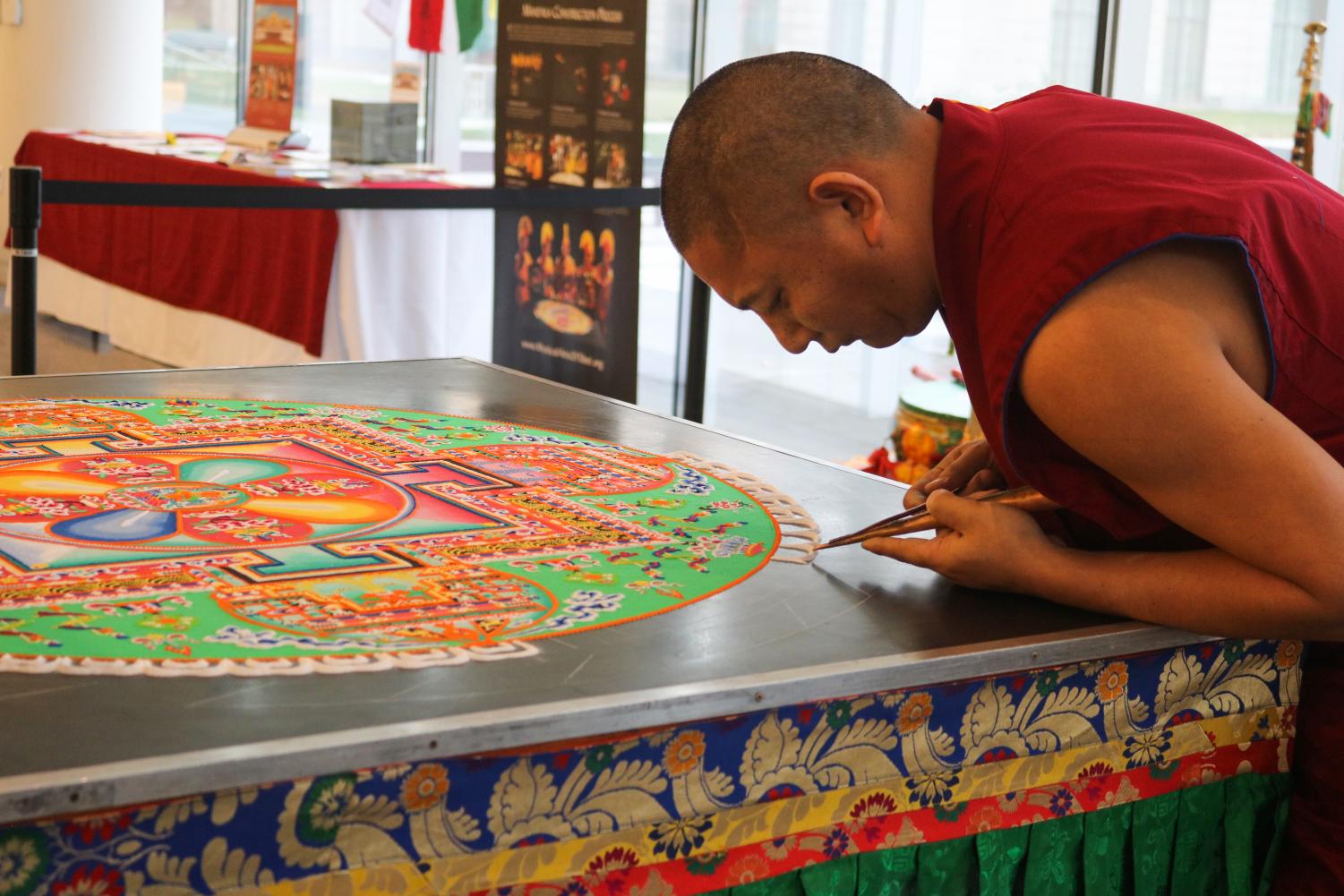 Avalokiteshvara, or Chenrezig as he is known in Tibetan, is the Buddhist deity who personifies the ideal of compassion. He can be portrayed in several different forms, two of the most popular being as a white deity with either four arms or 1000 arms; the extra arms symbolize his ability to help many beings simultaneously.

The Mandala can be described as being the residence of the respective deities and their retinues. The Sand Mandala of Avalokiteshvara was originated from the tantric teachings of Lord Buddha Shakyamuni. Although depicted on a flat surface, the Mandala is actually three-dimensional, being a “divine mansion” at the center of which resides Avalokiteshvara, surrounded by the deities of his entourage.

Every aspect of the Mandala has meaning: nothing is arbitrary or superfluous. The four outer walls of the mansion are in five transparent layers, colored as white, yellow, red, green, and blue, representing faith, effort, memory, meditation, and wisdom (these five colors also represent the five Dhakinis).

The four doorways, one in the center of each of the four walls, represent the Four Immeasurable Thoughts: love, compassion, joy, and equanimity and there are decorated with precious jewels. The lotus flower in the center of the Mandala represents the lotus family, one of the Buddha families that correspond to the five psychophysical components of a human being, and which purify specific impure states of mind; the Lotus family purifies passion into discriminating awareness. The white thousand arms, thousand-eyed Avalokiteshvara is standing in the center of the lotus flower, on a white moon disk.

In the four directions are seated his retinue seated on white full moon disks. The deities arise from the unity of; the wisdom of emptiness and great bliss of the principle deity Avalokiteshvara. Seated on the eastern red petal is the purified aspect of Hatred in the form of a blue deity Akshobhya, on the southern yellow petal is the purified aspect of Misery in the form of a yellow deity Ratnasambhava and likewise, the purified part of Ignorance & Jealousy are represented by the white deity Vairochana at the western and the green deity Amogasiddhi at the northern petal respectively. The central deity Avaloketishvara represents the freedom from attachment.

The four colors in the four directions are the emanated light rays of the four deity retinues. The lotus itself symbolizes the mind of renunciation. To protect the residence from negative conditions, it is surrounded by a Vajra fence, which also symbolizes the continuous teaching of the Vajrayana (Tantric Teaching) by lord Avalokiteshvara. In the outermost part, it is circled with burning flames that radiate with intense light and are not only for protection but also to burn away or to get rid of delusion and the darknesses of the ignorance.

In general, the Mandala shows a method of bringing peace and harmony in our world, through genuine practices of the mind of Great Compassion, the Wisdom of Emptiness, and the meditations of Mandala with their respective deities. We can generate the respective qualities as mentioned and thereby bring about a positive change in this world of ours.

For a practitioner who meditates on the Tantra of Avalokiteshvara, one would familiarize oneself with every detail of the Mandala and the deities within it, engaging in repeated exercises based upon visualizing the pure beings and pure environment which symbolized one’s own being and environment in purified, sublime form. Such exercises carried out within the basic Buddhist framework of developing wisdom and compassion, bring about a profound transformation of the psyche. Just to glimpse the Mandala, however, will create a positive impression on the mind-stream of the observer, who for a moment is in touch with the profound potential for perfect Enlightenment, which exists within the mind of all beings.

At the end of the ritual ceremony, the Mandala will be systematically dismantled and the sand powder of the Mandala will be poured into a river or a sea to remind the impermanence of the world. In fact, it serves to enrich the soil and the mineral resources and to eliminate the untimely death, diseases, famine etc. 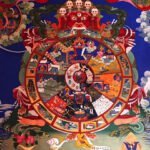