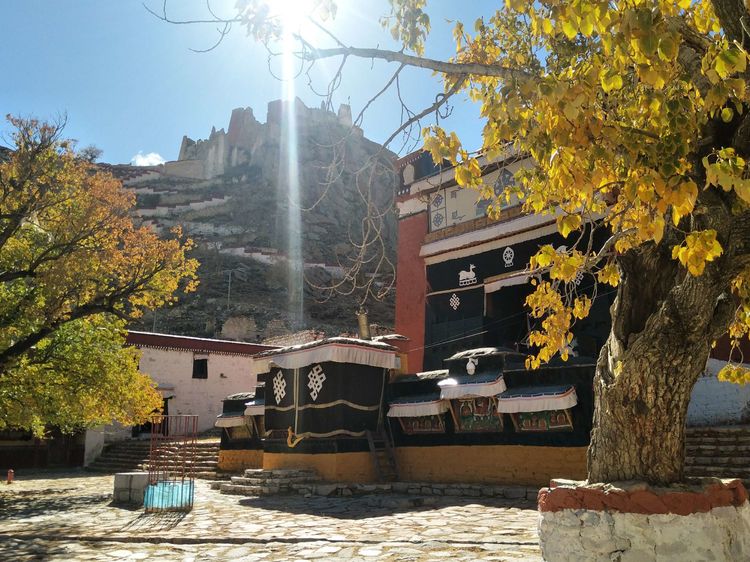 Phuntsok Ling Monastery is 4,100 meters above sea level in Phuntsok Ling Township, Shigatse Lhatse Prefecture. It was built in 1615 under the auspices of Taranath. Originally believed in the Jonang Teachings, by the time the Fifth Dalai Lama came to power, the temple was one of 13 temples that had been converted to the Geluk sect. The monastery once had 35 temples and a chanting hall, 3,300 monks, and built 94 rooms and 9-store.

Temple is a large-scale, covers an area of 37,800 square meters, with the assembly hall as the main body, surrounded by 16 small Lakang, as well as the Printing house and monk’s house, divided into mountains and sub-mountain buildings.

Phuntosk Ling Monastery was listed as an autonomous region-level cultural relics protection unit in 1996, the monastery sits west to east, divided into main buildings and ancillary buildings, the main buildings by the assembly hall, Debate cpurtyard, Dzong government sites, monks’ houses and so on. The building area of the assembly hall is 1700 square meters and consists of three floors.

The annex is an important part of the Phuntsok Ling Monastery, consisting of Thokchey Chenpo Lakang, Jijlakang, Rohan Hall, Budalakon, Bazhlakang, Zhuo Malakon, Lama Lakang, Zasilakang and some monks’ houses. The frescoes of Phuntsok ling are mainly distributed in the front porch on the ground floor of the assembly hall, the hall, the second floor of the temple and the three-story Buddhist temple, which have high historical, artistic and scientific value. In 2006, it was announced by the State Council as the sixth batch of national key cultural relics protection units.