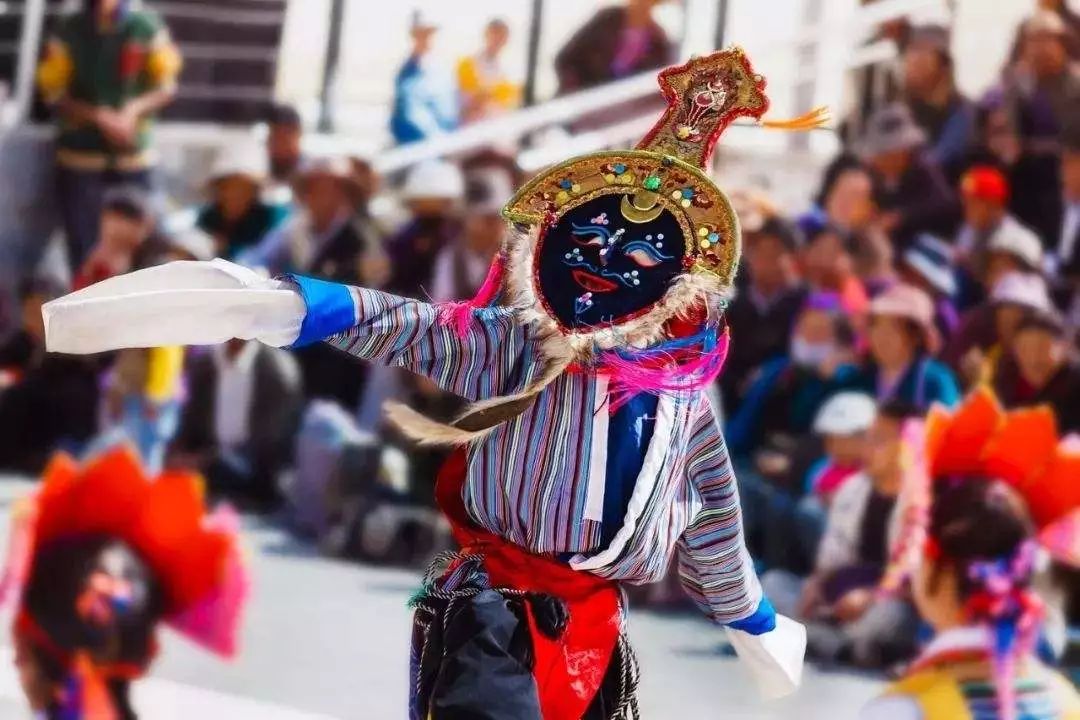 The opera, called “ache lhamo” in Tibetan, plays an important part in the social life of Tibetan people. It is a unique form in China’s various theatrical arts. “ache” means elder sister or a female, and “lhamo” means a fairy. Tibetan opera is an all-round performing art that tells the story by the form of fol dances and songs. Folk troupes of Tibetan opera are easily encountered any time and anywhere, with the audience from miles away to crowd the performer. This art style is influenced by Tibetan Buddhism from the view of skills and contents.

It’s widely believed that Tibetan opera comes from the following three aspects: folk songs and dance, folk rap, religious riruals and religious arts. Besides, there is a legend that the origin of Tibetan opera began from a dance to worhsip deity and the dance was created by Tibetan Buddhist, LianHuaShen, in 8th century. Later, LianHuaShen set up a theatrical troupe .It was composed of seven beautiful sisters who were good at dancing. They wrote and composed dramas of Buddhism stories and were on tour shows in Tibet. The shows not only cultivated ordinary people, but also collected some money.That is the beginning of Tibetan opera. Tibetan opera has many schools. It’s full of Tibetan chracteristics. Prince Nor-bzang, Princess WenChen, Prince Dri-med-kun-iden, Maiden Vgro-ba-bzang-mo, Brothers Don-yod and Don-grub, Gzugs-kyi-nyi-ma, Pad-ma-vod-vba, Maiden Shang-ma are eight classical operas, which have wonderful music, beautiful and colorful masks and finery.

Before the democratic reform in 1959, LangDa ,one of the forms of Tibetan opera, was usually sung without accompaniments. Even in some important occasions people sing and dance, only drums and cymbals were used as accompaniments.Today, such accompaniments are still used in some local bands.

One drum and one cymbal were used as accompaniments in traditional Tibetan opera performance, which determines the crucial role of their players and the beats of drum and cymbal. Like other local dramas, Tibetan drama contains a large quantity of patterned dancing acts and performers must be in harmony with the beats of drums and cymbals, otherwise they feel lost in dance and are unable to continue the dances. Gyaltsen, a famous drum and cymbal player in Jue Mu Long Tibetan opera troupe, viewed the art of playing drum and cymbal as “the shining eyes in the face, the beating heart in the chest, the heaven I adore all the life.”

When he was young, Gyaltsen spent some time in Sholchi lingka, where Garpa the Palace musical band practiced drums and cymbals, and where Tsechak Mandrukba taught the traditional beats of drums and cymbals. Gyaltsen went there every day. He also learned from his teacher La Wang Ou Zhu the art of drum and cymbal and the rigidly craving for art. With the small hammer, less than 13 inches long, Gyaltsen can play dozens of moods and rhythms, making the beating and rhythms properly go with the delicate expressions of various characters. Weak beat ring is for sorrow; strong beating for anger. Both beatings are slow drumbeat, called Duan Tong in Tibet. Fast beating is for tension and excitement. Allegro drumbeat is used in intermezzo for line reading; integrated drumbeat in riding, advancing, and climbing in the performance; Panzay has its own drumbeat. Gyaltsen’s drumming evoked, intensified, and strengthened the artistic charm in Kyurmu Long school of Tibetan opera. Gyaltsen mastered the drum system for traditional Tibetan opera：the drum system used the syllable of the Tibetan language to reflect the beat and rhythm of drums and cymbals. 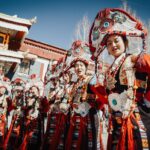