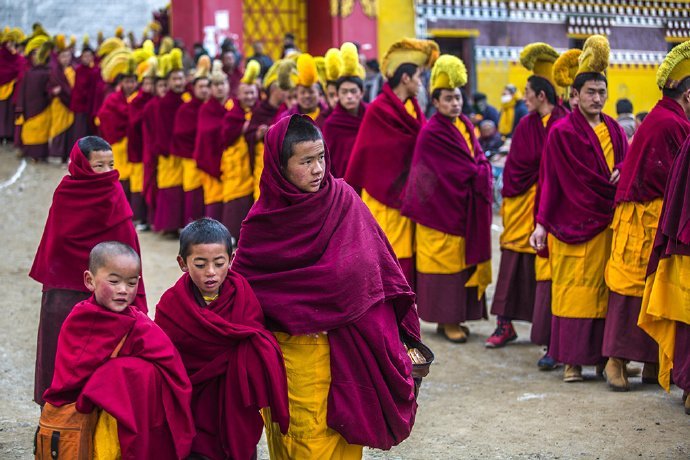 As onLiving Buddhase of the primary characteristics of Tibetan religion, the reincarnation system for the Living Buddhas is based on the theory of the reincarnation of the soul, and was produced to solve the problem of the succession of religious leaders. It is founded by the Gelug Sect (the Yellow Sect) of Tibetan Buddhism. The leader of one branch of the Gelug Sect, Dusum Chenpa, left his disciples his last words in 1192 that he would came back by reincarnation. They firmly believed that Karma Pakshi was the reincarnated soul boy of their master. Therefore, after 10-year cultivation, Karma Pakshi formally acted as the leader of this sect, becoming the first reincarnated Living Buddha in Tibet.

The reincarnation system for Living Buddhas of Dalai Lama started in the middle of the 16th century. In 1542, when Gen Ggatso, the abbot of the Gelug-pa Zhaipung Monastery, passed away, the monastery started to search for his reincarnated soul boy and finally confirm a noble child, Sonam Ggatso in Duilong in 1544. Two years later, 4-year old Sonam Ggatso was ushered to the Zhaipung Monastery. In 1578, he was conferred the honorific title “Dalai Lama” by the Mongol King Altan Khan. After that, Gelug-pa (the Yellow Sect) conferred posthumously Genzhuba the first Dalai, who was the youngest disciple of Zhong Kaba and built the Tashihunpo Monastery; conferred posthumously Gen Ggatso the second Dalai, who was the abbot of the Tashihumpo Monastery and of the Zhaipung Monastery successively; Sonam Ggatso, therefore became the third Dalai. Since then, the Living Buddha system of Dalai Lama came into being and was handed down from the first generation to the current 14th generation. Among them, the fourth is of Mongol descent and the sixth is Menpa, while the rest are all Tibetans.

The reincarnation system for Living Buddhas of Panchen Lama started from Luosang Qujie, the master of the 4th and the 5th Dalai Lamas. In 1645, he was bestowed the honorific title of “Panchen Lama” by Qosot Mongol Gushri Khan, then, the Gelug-pa (the Yellow Sect) admitted him as the 4th Panchen and conferred posthumously Kezhujie (a disciple of Zhong Kaba), Sonam Quelang and Luosang Dunzhu the first, second and third Panchen Lamas respectively. Every generation of Panchen all took the Tashihumpo Monastery as the home monastery since the 4th Panchen Lama. And, the reincarnation system was handed down continuously up to the 11th Panchen Lama of nowadays.