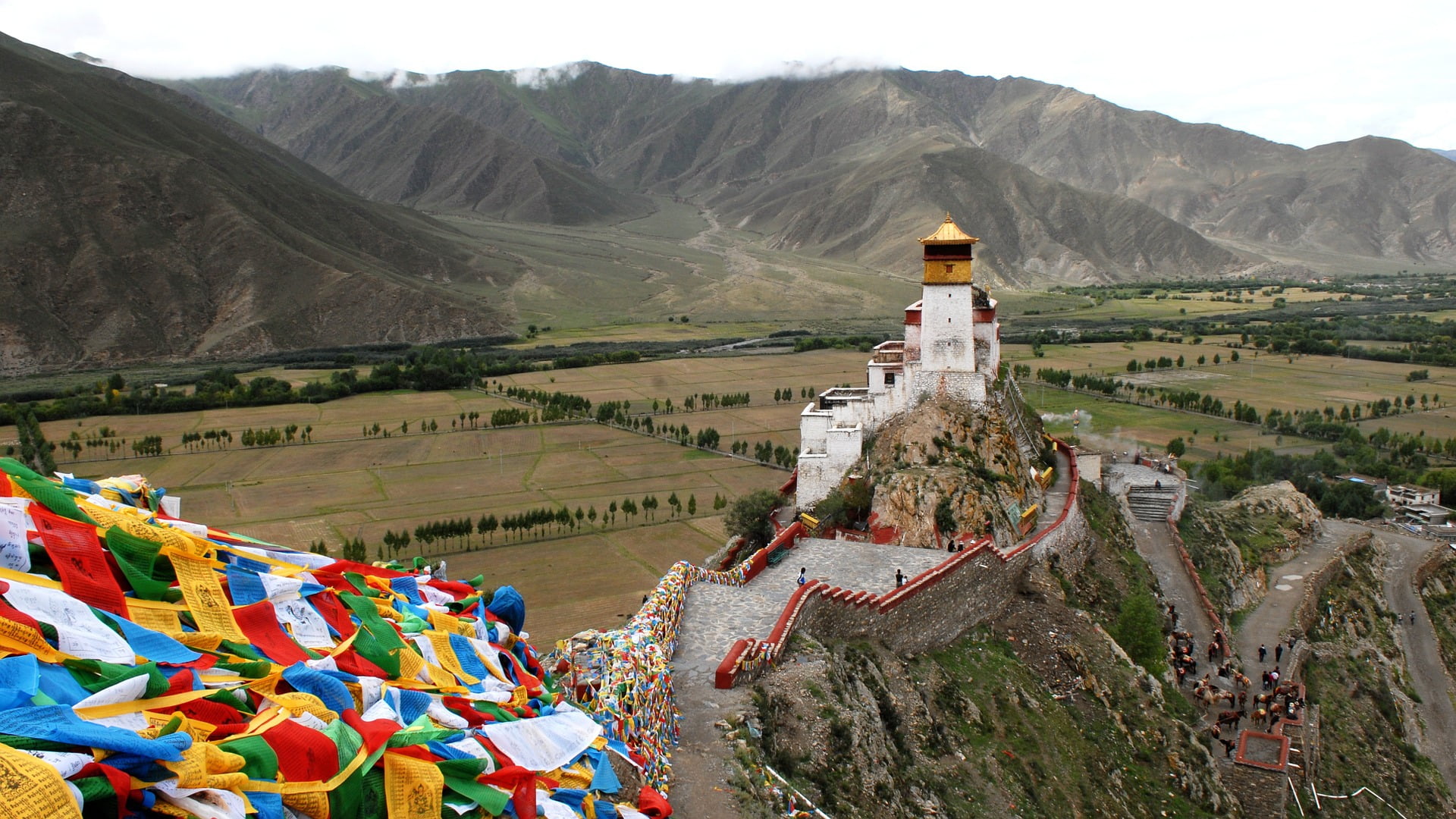 Yumbulagang Palace situated in NeDong County, about 8 km outh of Tsedang town. Known as the first imperial palace in Tibet, was built in the second century BC by Nyatri Tsanpo. In the 7th century AD, Songtsan Gampo moved the capital to Lhasa and Yumbulagang palace gradually became a Buddhist palace, and then the 5th Dalai Lama changed it as the monastery of Old-Yellow Hat Sect (Kadampa).The palace is mainly divided into two parts: the front part is multi-layer palace, while the back part is a square watchtower of a high blockhouse connected with the front part.

Perched on the mountain top, the towering and outstanding Yumbulagang lPalace ooks like a blockhouse. “Yumbu” means female deer named after the shape of the Jormo Zhaxi Ceri Mountain which looks like a female deer. “lagang” means sacred palace. Yumbulagang , “palace of mother and son” in Tibetan dialect, is the first palace and one of the earliest buildings in Tibet and it has a history of more than 2,000 years. It’s said that it was built for Nyatri Tsanpo, the first Tibetan King by Bon believers in the 2nd century BC. Then it became the summer palace of Songtsan Gampo and Princess Wencheng. The 5thDalai Lama changed it as the monastery of Old-Yellow Hat Sect (Kadamspa). The Jormo Zhaxi Ceri means “auspicious mountain” in Tibetan dialect. About 400 meters in the northeast from the mountain, there is an ever-flowing spring called “Geer spring”. It’s said that the spring can cure any diseases, so most people who come to Yumbulagang to worship will come here to have a drink and take a bath.

Location: Perched on the summit of the Jormo Zhaxi Ceri Mountain on the east bank of the Yarlung River, about five kilometers in the south from the Tradrug county.

Transportation: The most convenient way to Yumbulagang is to rent a motor tricycle for about 40 Yuan for a round-trip. Bargaining with the driver in advance to stop at Trandruk Monastery on the way back in order to prevent the driver asking for an extra charge

Recommended visiting time: about an hour or so.

Legend: There is a folktale about the construction of Yumbulagang. It’s said that the first Tsanpo who was the Heavenly son descended to Tsantang Plains by heavenly ladder one day and was seen by 12 Bon herdsmen and they made him king of the tribe. Because he was brought down to the tribe seated on the shoulders of the herdsmen, the name Nyatri Tsanpo which means “the King Seated on the Throne Neck” was given to him. Then people of the Yarlung tribe built Yumbulagang as the palace for Nyatri Tsanpo.

Scenic spot: Yumbulagang is mainly divided into two parts: the front part is multi-layer palace, while the back part is a square watchtower of a high blockhouse connected with the front part.

In the 7th century AD, Songtsan Gampo moved the capital to Lhasa and Yumbulagang gradually became a Buddhist palace. The ground floor is the palace of ancient Tibetan Kings. Now in the middle you would see a statue of Buddha with Nyatri Tsanpo’s statue on the left and Songtsan Gampo’s to the right. Along the left wall are statues of Songtsan Gampo’s capable ministerSanbuzha、Tritsong Detsen, Tibetan ruler Totonianzhan. Along the left wall are statues of Tibetan rulerHeyebabu, Wusong, Songtsan Gampo’s another minister Ka Dongzhan.The first floor is an elaborate hall enshrined the statues of Avalokitesvara and Sakyamuni. It’s said the statue of Avalokitesvara in Yumbulagang is as ancient as that in Potala Palace. The walls are painted with beautiful murals which tell the early history of Tibet. The most famous one of those is the first one on the left which tells the story of the first Tibetan King Nyatri Tsanpo.

The highest point of Yumbulagang is a watchtower. It’s said that Princess Wencheng lived here for her first summer in Tibet. Standing on the top and looking around, you can enjoy the excellent panoramic view of the valley.

The original palace is of medium size and it was enlarged by the 5th Dalai Lama and became a Buddhist monastery gradually. Presently, besides the rooms for the monks, there is a bedroom for Dalai Lamas who come here to do religious service.

1. You could hire a yak up and down Yumbulagang, 10 Yuan for climbing up and 5 Yuan for down. These yaks are considerably clever. If they see you take a photo for them, they will stand still at once and won’t move until you finish. The ground floor is free for a visit but you must pay 15 Yuan for entering the first floor of Yumbulagang