2,000 meters long and several hundred meters wide, Basum Tso, is also called Drak Sum Lake, which means a lake surrounded by the Rocky Mountains in Tibet. It shapes like a huge crescent set in the Grand Canyon. Birds like the yellow ducks and white cranes flock here for the numerous fish in the lake. The reflection of the white snow mountain on the crystal like the flowers, butterflies on the bank, and wide animals in the woods make it a real paradise for all creatures.

Different from other holy lakes in Tibet, Basum tso is surrounded by dense green primitive forests. As its name implies, the lake is as green and clear as pure jade in which the fish can be easily seen. The green peaks around the lake are permanently frozen and their reflection on the lake surface constitutes a very pretty watercolor. What matters most is that there is still isolated and free from the disturbance of the outside world.

“Goat Back Rock”, an isle on the lake center, was formed by the ancient glacier movement and we still see the scratches left by the ancient glaciers today. The isle, also called Tashi, is believed to be empty inside. Put differently, its bottom doe not touch the lake floor or it is floating on the water. Whether it is the case, the chance is yours to make a judgment on the isle.

On the isle there is a small but exquisite temple called Tsozong Gompa of 200 square meters only. Built 1500 years ago in the Tsenpo Period of the Tibet Empire. the two-storied temple is a wood structure. Lots of Buddha and animal statues were carved out of the reefs on the isle. In the main hall of the temple there stand the statues of 1,000 arms Chenrezig, Arhat, Dakhini, and Guru Rinpoche.

At the foot of a Buddha’s warrior attendant, there is a small round concave, which is said to be the mark left by King Gesa’s horseshoes. There go many other legends about the small isle: the sword mark left by king Gesa, the Tibetan Letter Tree, the foot mark on the rock of Songtsen Gampo, and the holy spring where Padmasambva used to wash his face … All these tales add more mystery and charms to this isle. A pine and a peach tree have joined their branches together like “husband and wife” in the south of the temple, which adds some romance to this pure land. The pink peach blossom with green pine needles in summer is a special attraction here. The lamas and followers of the Tsozong Gompa Temple all come and go by canoe.

There is a mysterious cave called “Begging for a Son Cave” beside a brook on the southern bank of Basum Tso. In the 20 cm wide and 40 cm deep cave on a big rock, there is a small rock, which resembles the female sexual organ. It is said that it has been empowered by  Guru Rinpoche so women can come here to beg for a son. On the nearby sands, there is the Guru Rinpoche Practice Cave. On the western bank is the location where King Gesar is believed to trial his arrows. The legend says that each year on the 15th of April in the Tibetan Calendar a long white ribbon will grow from the center of the lake bed, which is a Khada (a Tibetan white scarf) as a tribute to King Gesar.

There stands a huge rock in the northwest of the lake with a hole through its center. The locals believe that going through the hole will ward off bad luck. a holy lake of the Nyingma Sect, each year Basum Tso attracts a large number of people to make the circle-the-lake trip. Around the lake there live many Tibetan people.

Going upstream of the lake, one sees many huge glaciers on the tributes and origins of the lake. Their long and big ice tongues go among the trees and the glacier, supplying abundant water for the neighborhood. Besides the picturesque lake, there are lines of villas for the holiday village. 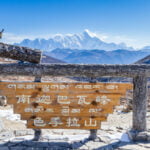 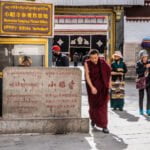 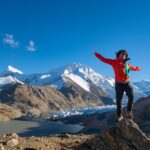