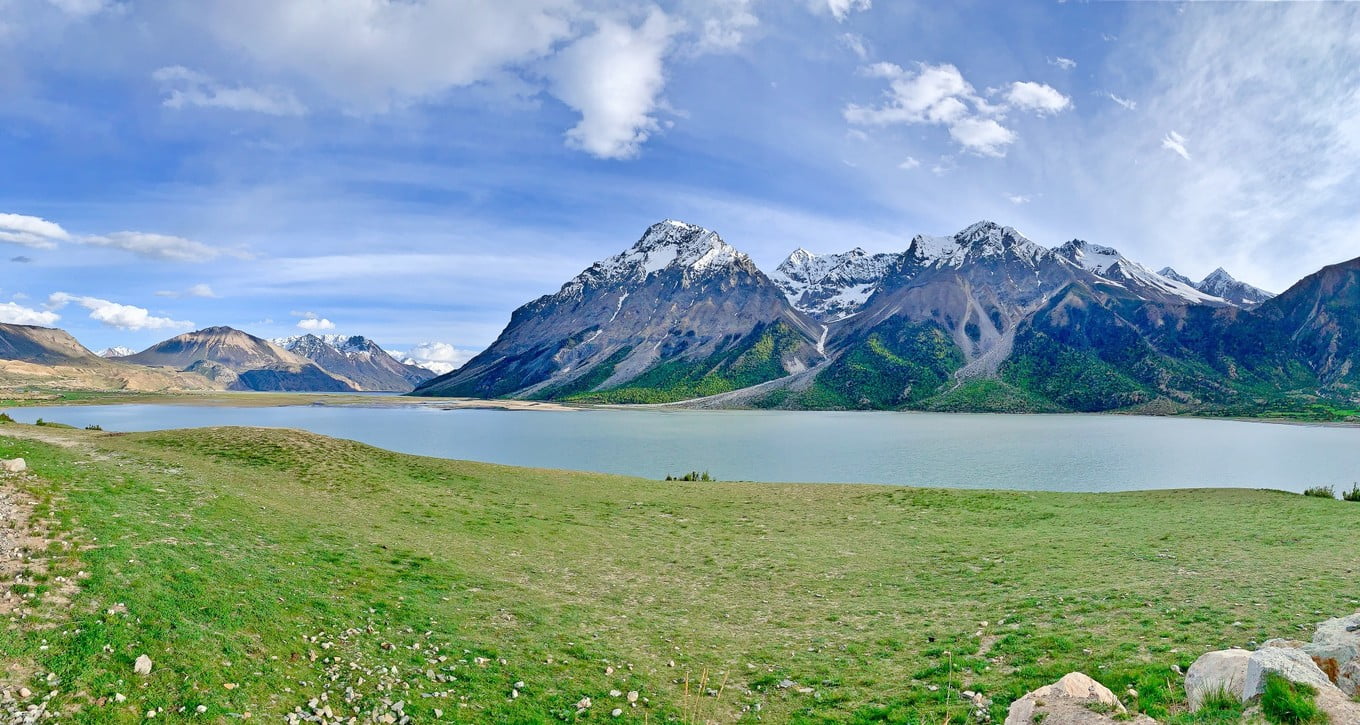 The Ranwu Lake is a perfect blending of the Swiss Alps snow peaks and glaciers and the streams in Jiuzaigou (a pretty town in central China). Just as depicted in the diary of Mr. Zhang Qingsong (a known professor from the School of Geography, Chinese Academy of Science who has set foot on all the three poles of the planet): “in my first journey to Tibet in 1975, I took a bus down the Sichuan-Tibet Highroad from Chengdu to Lhasa. After passing the Henduan Moutain Range, the valleys of the Rivers of Jinsha, Lanchang and Lu, I stayed in the Ranwu Garrison overnight, the poetic scenery of the Ranwu Lake drove away all my fatigues. How amazing are those upright high peaks, white glacier, blue lake water, green grassland, floating white clouds, lush forest …”

The Ranwu Lake, the largest in southeast of Tibet, is in the Village of Ran about 90 km from the Baiba Town neighboring the Nyingchi Prefecture. The lake, 3,800 meters above the sea level, has a water area of 22 square kilometers. On the bus ride from the Basu County, Chadu down the Sichuan-Tibet Highway (now the National Highway No. 318) one can see a corner of the lake. This is the most dangerous highroad in China.

The Ranwu Lake is surrounded by many scenic highlights, e.g. the Gangrigabu Snow Mountain in the southwest, the Azhagongla Glacier in the south and the Bosula Peak in the northeast. The melted snow and ice supply the lake with sufficient water and are also the source of many rivers such as Yaluzhangbu. The green grassland around the lake, the sky-blue lake water and the white snow mountains constitute a very pretty watercolor. The Amucuo Lake shrinks westwards and finally became a river valley. Its water takes on different colors in different seasons of a year and the water surface is dotted with isles or reefs.

Many of the peaks surrounding the lake are over 5, 000 meters high and thus permanently locked with glaciers. The foot of these peaks, however, is green with pines and cypresses. The lake is especially womanish and tranquil in the arms of the peaks, whose beauty goes beyond words. The browsing herds of cattle and sheep, the barley paddy, bean and cabbage field form an oil painting that can be seen no elsewhere.

Ranwu in Tibetan means the place where dead bodies pile up. It is said that once upon a time a water buffalo and a scalper lived respectively in the lake and on the lake bank. They were hostile to each other and often fought together. Eventually they died one day in a fierce fighting and soon became two mountains near the lake. This tale has no scientific ground with regards to the formation of the Ranwu Lake though; modern geographical research does suggest that its formation is linked with the collision of three “bulls”, i.e. Himalaya, Nianqing Tanggula and Handuan Mountain Range.

Another legend is about monkeys. Long long ago, on a mountain between Ranwu and Kangsha there lived a group of very mischievous monkeys who often mocked and disturbed the local farmers. They attacked and harassed the farmers in the evening and did not fear them at all. To cure this headache, the farmers came up with a trick. All the men went out and drank wine on the hillside. After drinking a lot, seemingly being annoyed among one another, they started a fighting with wooden swords and knives. In the fake duel the men fell dead one after another, and the monkeys observed all these. In the midnight the farmers quietly returned to the village and left plenty of wines, real sharp swords and knives. After all the men had gone, the monkeys came down from the trees and picked up the wines and swords that remained. This time the duel was not a false one. Stimulated by the alcohol, the monkeys soon burst into genuine battle and they also got killed one after another. In the end only one monkey survived and was very lonely and sad. He desperately committed suicide by bumping his head on the rock. The farmers won the war against the monkey and called the mountain “monkey bumping his head mountain” since then. These entertaining folk tales add to the appeals of the pretty scenery.