Originating in 1409, the Geluk Sect, the latest sect of Tibetan Buddhism, is formed during the process of the Reformation held by Je Tsongkhapa, a famous reformer in the history of Tibetan Buddhism in the 15th century. He was born at the age when the Jangchup Gyaltsen took the place of the Sakya sect. At that time, monks of the top class not only participated in the struggle for political and economic power but also lived an increasingly corrupt life, gradually losing the support of people in society. In view of this situation, Tsongkhapa preached and spread the tenets around, calling on people to value the religious disciplines; wrote books to explain his religious theory, assailing the monks who broke the religious disciplines, pushing on the Buddhist Reformation in Tibet.

The Geluk (yellow hats) tradition was founded by Tibetan teacher Je Tsongkhapa (1357-1419). The basis is formed by the old Kadam lineage, but it in fact includes all other Tibetan traditions. For example; Tsongkhapa’s main teacher was the Sakya teacher Randhawa.

In the first month of the Tibetan calendar in 1409, he held the Great Prayer festival for celebrating Buddha’s success in defeating magic competition, it was the Great Prayer festival handed down to us today. After that, Tsongkhapa built the famous Ganden Monastery and set up a highly disciplined sect, Gelug (means being good at disciplining). Since Tsongkhapa and his followers all wore yellow hats, it is also known as the Yellow Sect. Later, Drepung, Sera, Tashihungpo, Kumbum and Labrang monasteries were built in succession and, together with the Ganden Monastery, they were called the top six monasteries of the Geluk sect. Besides, they also founded the two greatest Living Buddha Reincarnation systems –Dalai Lama and Panchen Lamas.

Sonam Gyatso (1543-1588), received the title ‘Dalai Lama’ (Ocean of Wisdom) from the Mongol ruler Altan Khan in 1578. In 1642, the 5th. Dalai Lama became a temporal and spiritual leader of Tibet by the order of the Mongol ruler Gushri Khan. Although trained in all four schools, basically all Dalai Lamas were Gelug; one of the reasons that Gelug tradition is most widespread in Tibet. Note that the posthumously declared “First Dalai Lama” named Gedun Drupa (born 1391) was a disciple of Je Tsongkhapa.

Unlike what many people think, the Dalai Lamas are not the spiritual heads of the Gelugpa school; this is always the Gaden Tripa. Some typical aspects of the Gelug tradition: emphasis on ethics and sound scholarship. Main Buddhist teachings are collected in the Lamrim presentation (not unlike the Lamdrey teachings of the Sakya). The Gelug introduced a scholarly title, Geshe, for a fully qualified and authoritative spiritual master.

Ganden Tripa is the spiritual title for the head of the Gelugpa, Ganden Tripa is neither reincarnation nor heritable, it is appointed on the basis of some competitive examinations among the candidates, and the duration of the position is a 7-year term. 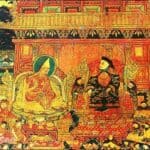 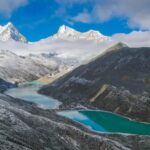