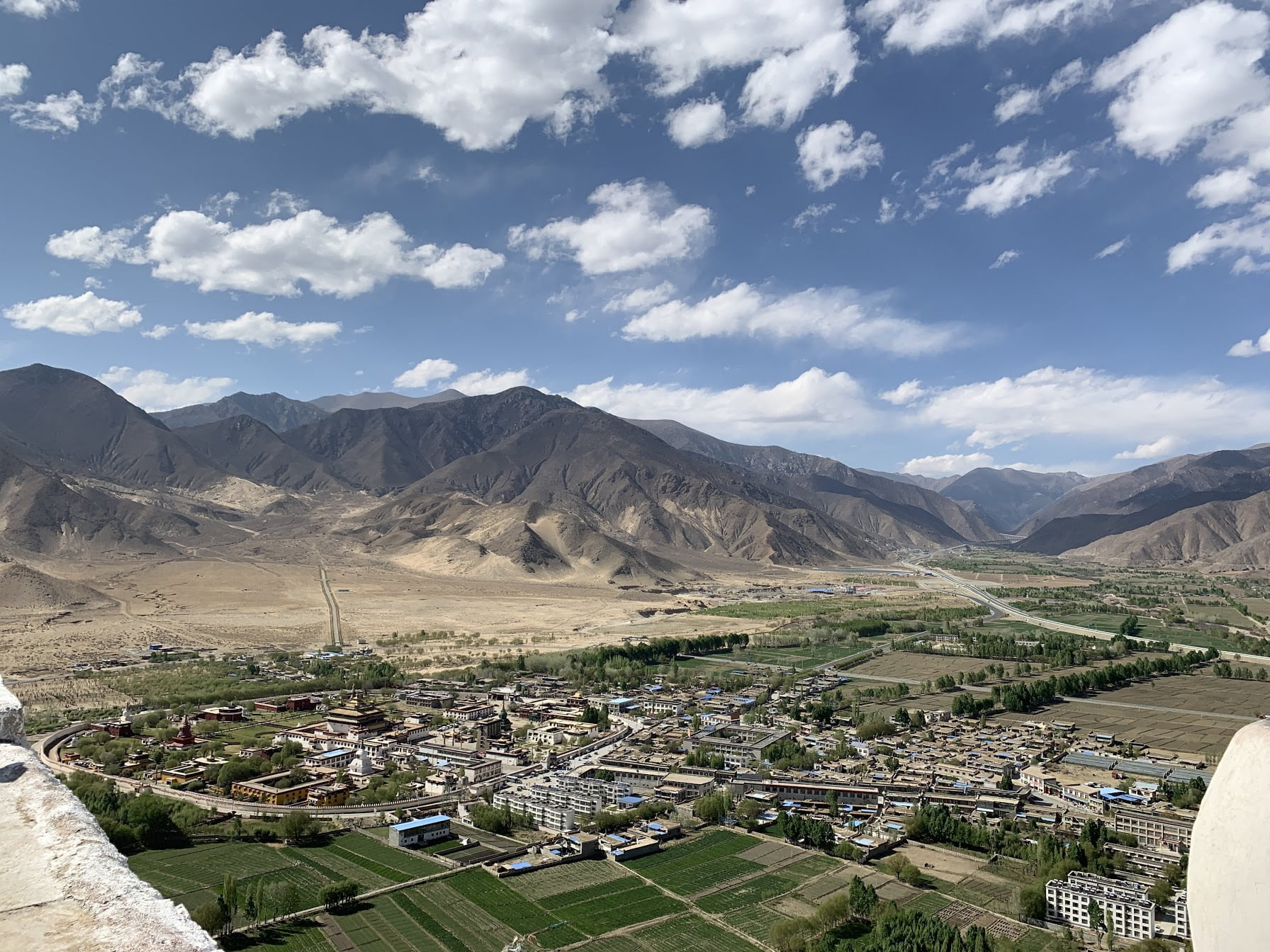 The construction of Samye Monastery began in 762 AD and was completed in 779 AD. It is the first monastery in Tibet featuring Buddhist, laws and monks, where the famous debate of the doctrines between ancient Indian Buddhism and inland Buddhism happened. The monastery is modeled on the Odantapuri Temple in Bihar, India. After several dynasties’ extension, it now covers a large scale of more than 4,900 square meters.

Before “Utse” the Great Hall which combines Chinese, Tibetan and Indian architectural styles, there is a stone “stele”, which was erected to honor Trisong Detsen’s vow of his piety to Buddhism. In the monastery there is a pair of white marble statues, their shapes are simple and with a carving style of Tang Dynasty. They are the most precious remaining stone sculptures in the monastery. Besides, there is a rare bronze bell with ancient Tibetan script on it. According to the record, this is the first bell cast in Tibet.

Located at the foot of Mt. Hepo Ri, on the north bank of the Yarlung Tsangpo River of Zharang County, Samye Monastery is about 38 kilometers from Tsedang. It’s one of the main scenic spots of the state-level scenic area – the Yarlung River Scenic Area.

Taking a Lhasa-Tsedang bus in Lhasa, it’ll take you 3 hours to get to Samye ferry crossing. Or you may take a bus from Tsedang to Samye ferry crossing, about 30 kilometers long. Either route will charge you 27 Yuan per person. Then you can spend 360 Yuan to rent a ferry to cross the Yarlung Tasangpo river. You may also enjoy the fun by taking a sheepskin raft. After going ashore, you’ll spend 3 Yuan to Samye Monastery by truck.

Another name of the Samye Monastery is Samyuan. “Samye” is the transliteration of Tibetan, which means “unimaginable”. It was said that in order to promote Buddhism, Trisong Detsen asked Indian monk Padmasambhava for suggestions about the construction of the monastery. Padmasambhava, exerting his magic power, showed the king an image of a monastery in his palm. This was really “unimaginable”. After it was built, it got the name “Samye Monastery”.

Samye Monastery was built by King Trisong Detsen in the 8th century. In the mid-9th century, it was closed because Buddhism was forbidden in Tobu (ancient name for Tibet). In the late 10th century, Buddhism prevailed again and it became the central monastery of Nyingma Sect (Red) (one of the Tibetan Buddhism sects). At the time of Samye’s construction, Buddhism had been transmitted into Tibet, but there were no formal Buddhist priests or rituals. Trisong Detsen decided to consolidate his political power with Buddhism after he came in power. So he welcomed Buddhist figureheads from Nepal and build Samye, the first formal monastery that established “triratna”, referring to the Buddha, the Dharma and the Sangha. Soon after the construction, King Trisong Detsen ordered seven Tibetan nobles tonsured at Samye Monastery, and they became the first group of monks in Tibet. who were known as the “Seven Jueshi”. So Samye Monastery became the first complete monastery in Tibet with “Buddhist, laws and monks”.

Padmasambhava chose the construction site while the design was done by Santarakshita. Trisong Detsen hosted the foundation stone laying ceremony. After Samye Monastery was completed, Trisong Detsen declared that all Tobu people must believe in Buddhism so as to establish the noble status of Samye Monastery.

The layout of Samye Monastery was designed to represent the ideal universe described in Buddhist scriptures. “Utse”, the Great Hall symbolizes “Sumeru” in perfect Buddhist universe. The Sun and Moon chapels encircled represent sun and moon separately. The four “stupas” standing at each corner of the Hall represent the four Heavenly Kings. Four larger halls and eight smaller ones evenly distributed around “Utse” embody four continents and eight eparchies. A circular wall surrounding the monastery represents a mountain near the border of the universe.

With trees growing luxuriantly, rivers flowing around the monastery, black neck cranes looking for food leisurely, it may be called a haven of peace and oasis of the Plateau. Samye Monastery covers an area about 110,000 square meters, including more than ten main halls. “Utse”, the Great Hall is as large as about 4,900 square meters and consists of two parts: the main hall and the winding corridors. Its structure and the decoration combine the styles of India, China and Tibet. There are three entrances facing east, south and north of the winding corridor. The magnificent main entrance in the east is decorated with stone pillar inscribed with Buddhist scripture on both sides and a huge “xianbu(a piece of cloth)”hanging under its porch. The left and right walls beside the main entrance are decorated with relief sculptures named “zhaxita knot” which stand for good luck and richness. The relief sculptures on the left wall are: the wheel of the law, milk bucket, “zhaxidele”, Tibetan rice, conch, celestial grass, tsampa and barley. On the right are: treasure umbrella, double fish, conch, flowers, auspicious knot, wheel of the law and stone pillar inscribed with Buddhist scripture.

Outside the main entrance of “Utse”, the Great Hall is a Tobu stele which is 3.8 meters high with a pedestal of 0.8 meter. The inscription on it is Tibetan (which is translated into Chinese as “tufanjinshilu”). On both sides of the main entrance is a pair of stone lions. The lions are 1.2 meters high, 0.47 meter wide and 0.76 meter long. The pedestal is of square shape and carved with square lotus pattern. The pair of marble stone statues in the monastery is 1.05 meters with a carving style of Tang Dynasty and their shape are simple and unsophisticated. They are treasures of the monastery. There is a bronze bell of 1.1 meters with a diameter of 0.55 meter. On the bell is ancient Tibetan script. It is very precious because it’s rare to see bronze wares with minority’s script.
In the hall, there are two bronze Buddha, one is Cibamen Buddha, the other is “Xiajituba”. Both are statues of 1.75 high and 1.1 meter wide.

The winding corridor has three gates and is connected with the gateway. There are double-posts under the corridor whose bases are carved with upside down lotus pattern or knot pattern and the heads are carved with clouds and painted with colorful patterns. All together there are 184 posts under the winding corridor, which looks very solid and grand. There are beautiful murals in other halls and they are of distinctive characteristics.