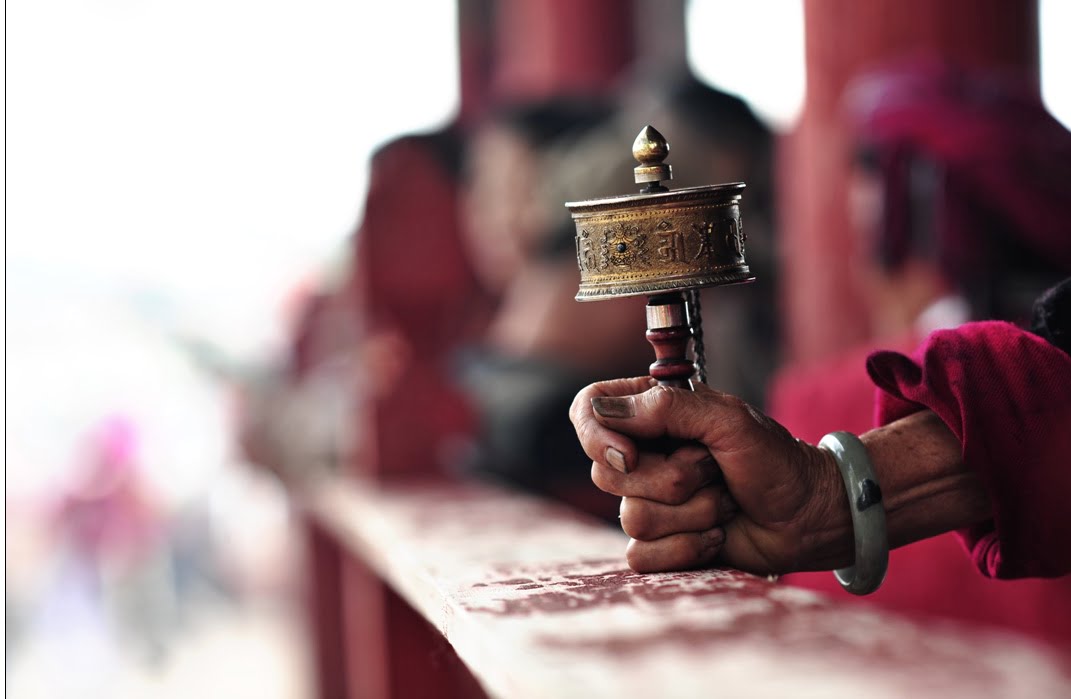 The rise of Buddhism in Tibet is very contradictory, but many sources say that the first official introduction of Buddhist scriptures into Tibet occurred during the reign of the 28th King of the Yarlung Kingdom (about 500 AD). This book was not translated into Tibetan until the reign of King Songtsen Gambo (b. 617), the 33rd King of Tibet.

The king married two wives from neighboring countries in addition to his three Tibetan Wives. from Nepal and China.  Two princesses brought precious Buddha statues as dowry in Lhasa. To housing their Buddha statues they build temples in Lhasa.  Jokhang Temple was built by Princess Brekuti (Princess of Nepal), and Ramche Temple was built by Prince Wencheng (Princess of China). This was the first time Buddhism introduces in Tibet.

After the second half of the 8th century, Tibet actively promotes the Buddhism with king’s Support. Trisong Detsen, 37th king of Tibet, invited the Indian master Padmasambhava and Śāntarakṣita, Vimalamitra to Tibet. In Samye, the first Buddhist monastery, an orderly spiritual community was established. During this time, big-scale translation of the Buddhist canon really began. Many Indian scholars like Kamalashila were also invited to Tibet to translate Buddhist scriptures into Tibetan. All these contribute to the firm establishment of Buddhism in Tibet because the existence of the Sangha is considered necessary. In 792, after a great philosophical discussion, King Trisong Detsen officially declared Indian Buddhism as the state religion of Tibet.

Padmasambhava, a Maha Yogi from the Hindu Kush, gave a more in-depth introduction to the esoteric meaning of Mahayana. It is to use hidden power to ensure liberation and avoid endless rebirth. It is also a Shamanistic method, but with new goals. After the Padmasambhava defeated all the Bon magicians, he successfully changed the faith in Tibet and defeated them one by one.

On impulse, the Great Samye Monastery was built around 775. Taking the classic Indian tradition, the Nalanda tradition as an idol, many temples were built between Lhasa and the Yarlung Valley. There are hundreds of meditation caves across Tibet and Himalayan kingdoms. It is believed that due to his visit, these hermits and caves can still be visited and operated by local yogis and meditators.

Buddhism is almost disappeared when Langya King brutally persecuted it in 842 AD. For a long time, there was no ordination or central religious authority in Tibet, but the primitive Bon religion prevailed. With the help of Tibetan monks studying in India, Buddhism was revived with the help of the Guge King Yeshi.

The real revival took place after 1042 when Atisha Dipamkara (Jowo Je) brought the Buddhist teaching. He introduced Buddhist philosophy very clearly and concisely, which became the basis of philosophical teachings. In most Tibetan traditions. After Atisha, the influence of the Indian master was limited. The main disciple of Atisha was Drom Tonpa, who founded Kadam. This tradition no longer exists in this form, but it strongly influenced the Kagyu, Sakya, and especially Gelug tradition.

Tibetan Buddhism carefully reflects the Buddhism that existed in India around the 11th century. Many Tibetan masters rejected the term Lamaism because it showed that Tibetan teachers developed their own forms of Buddhism. Since the beginning of Buddhism in Tibet, the Tibetan Bon religion has become a more influential religion. Prayer flags and incense may have been spread from the Bon religion.

Not only foreign influences, but Tibetan master also promoted the development of Buddhism, and gradually developed into four different sects in different periods: the Nyingma school founded by Guru Padmasambhava, Atisha and his Tibetan disciples Dromtonpa introduce Kadampa. The Kagyu Sect is founded Marba and Milarepa, the Sakya Sect founded by Khon Kunchok Gyalpo and Je Tsongkhapa founded the Gelug sect.