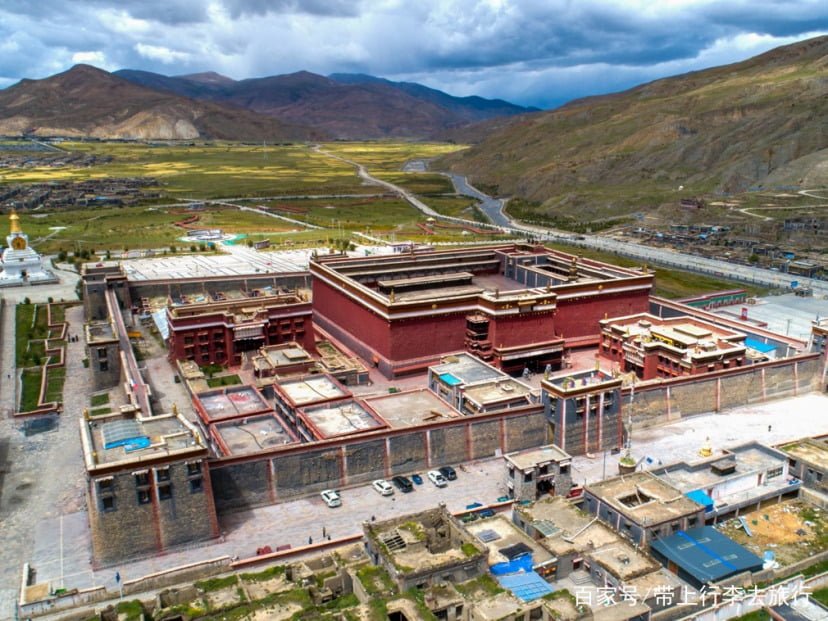 Tibetan Buddhism, In 1073 BC, Tibetan Lama Kongchog Gyalpo built Sakya Monastery and advocated his own Esoteric disciplines and called it “Sakya Sect”. Enclosures around the Sakya monasteries are painted with red, white and black stripes, which respectively symbolize the Wisdom Buddha, the Goddess of Mercy and the Diamond Hand Buddha. Hence, the Sakya sect is also known as the Colorful Sect.

The Khon family and Sakya Sect

The core of the Sakya Sect was developed from the Khon family, a prosperous family during the period of Tobu which reigned an area of Lhasa, Ngamren and Sakya. After one of the seven nobles in the family tonsured at Samye Monastery, the family produced many early lamas and secular masters of the Nyingma Sect. Konchog Gyalpo as one of them visited renowned monks and studied scriptures and mastered the doctrine of different schools. He built the Sakya monastery (at the north bank of Drongchu River in Sakya County) and began to teach to his own followers, Sakya Sect thus came being. Sakya means “white land” in the Tibetan language. The name of the Sakya Sect is from the fact that the Sakya Monastery is built on a greyish white hill. As the enclosure of the monastery is painted red, white and black, it is also called “Colorful Sect”.

Later, there came five figures who contributed greatly to this sect who were addressed “five Sakya Sect Forefathers” They were Sachen Kunga Nyingpo (the son of Konchok Gyalpo) the second and the third son of Sachen Kunga Nyingpo, Sapan Kunga Gyaltsen and Drogon Choegyal Phagpa. The first three Forefathers didn’t renounce the family and they were called “red dress forefathers”, while the last two renounced the family and became monks and they were called “white dress forefathers”. Now in Sakya Monastery, Palkor (Kumbum) Monastery in Gyantse and other large Sakya monasteries are enshrined their statues.

Sapan Kunga Gyaltsen (1182-1251,) was one of the most famous Buddhists in Tibet then. He once pursued studies after an Indian Buddhist master. He rose to fame after winning a debate between Tibetan monks and Indian scholars. It’s said that the braids of those six Indian scholars are still hanging in Sakya monastery and they renounced the family and became pupils of him. In 1247, the Mongolian prince Godan Khan conquered Tibet and gave temporal authority over Tibet to Abbot Kunga Gyaltsen (better known as Sakya Pandita), who was one of the earliest major figures in this lineage.

In 1254 Mongol emperor Kublai Khan invited Chögyal Phagpa from this sect for teachings. Also, Kublai Khan made Buddhism state religion in Mongolia and made Chogyal Phagpa the first religious and secular leader over Tibet. Sakya masters ruled Tibet more than 100 years, A typical aspect of the Sakya tradition is called Lamdrey (leading to a state of Hevajra), a concise presentation of the Buddhist philosophy. The Sakyas were much influenced by the Kadam lineage. In 1354, the rule over Tibet was given to the monk Changchub Gyaltsen, who was not a Sakya practitioner and after this, the tradition of Sakya declined its importance in Tibet.

Sakya Monastery, Gonggar Monastery near Gonggar county of Shannan Prefecture and the Shalu Monastery near Shigatse. The central monastery Sakya Monastery is rank the most important Tibetan monasteries and is still one of the most important monasteries worshipped by Tibetan. The monastery has a large collection of books and is famous for its murals, which has the name of “the secondary Dunhuang”. Depending on the monastery, later Sakya Sect still had great power. Even after GeluK Sect united Tibet, “Sakya Emperor” still enjoyed the power of rule and high status. Now Sakya Sect as well as Nyingma Sect spreads its doctrine overseas and is exerting a tremendous influence gradually.