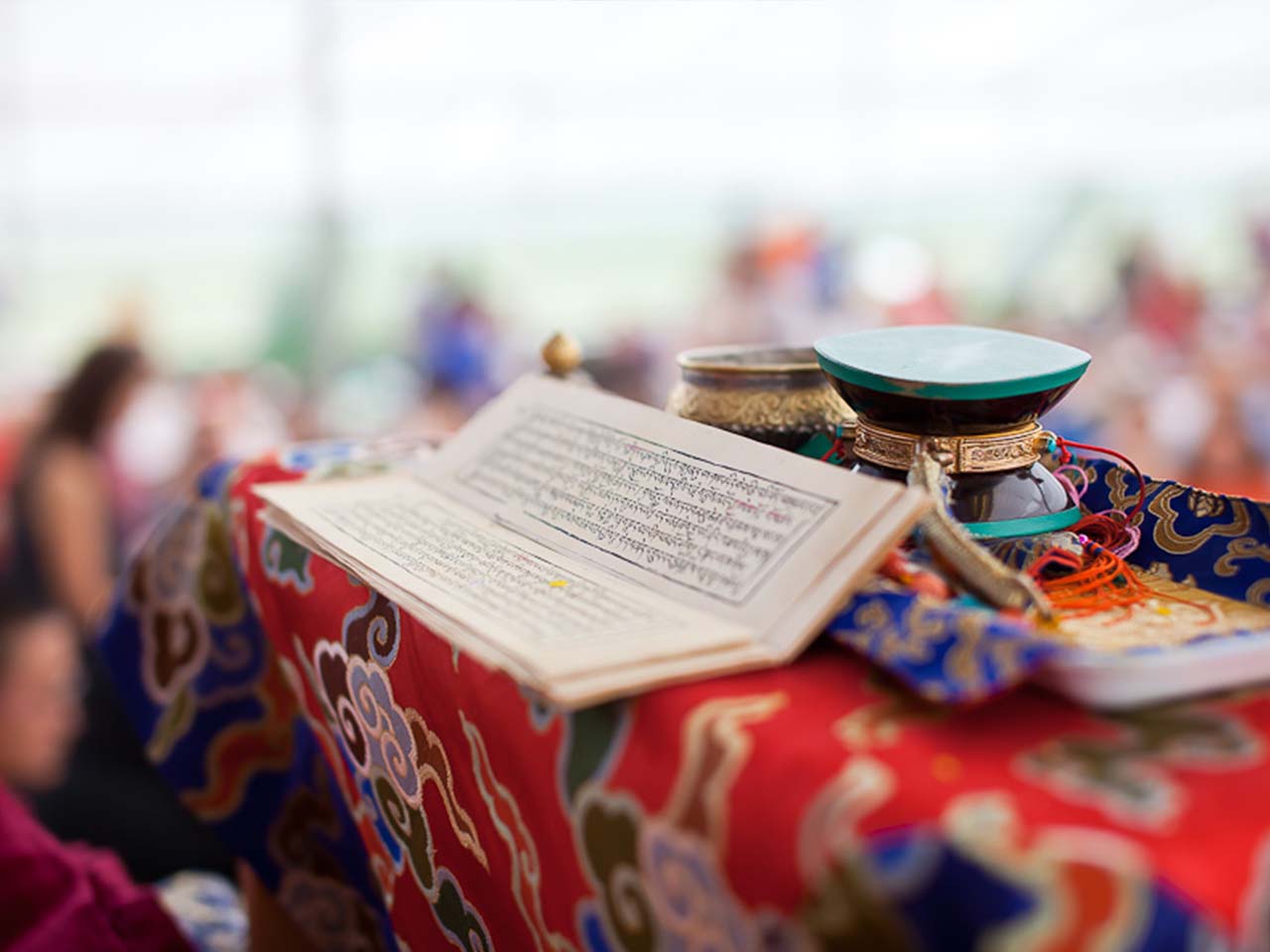 The Kagyu Sect was developed during the Later transmission period of Buddhism in the 11th and 12nd centuries.  and belongs to the newly translated tantra school. At the beginning, there were two founders: one is Qiongbulangjueba (990-1140), the other is Maba lozawa (Maba translator) (1012-1197). The two of them have been to Nepal, India and other places many times, have followed many famous teachers, and learned a lot of tantric methods, mainly for the “Four Major Linguistics Professor”.

“Kagyu” is the meaning of the Buddhist teaching inherited by the patriarch’s oral transmission.  Later, the Shangpa developed into an inheritance system called the Xiangpa Kagyu in the later Tibet, and the Marpa developed an inheritance system called the Dab Kagyu in the former Tibet. Although they have different portals, they are both called Kagyupa because they both come from the same source, and they both personally teach the decree.

The three famous major masters of the Kagyu Sect are Marba, Milarepa and Dagpo Lhajay. Among whom, Marba had been to India for three times to learn from many eminent masters like Naroba, who ranked the 84th achievement masters of Tantric Hinduism. While the supreme master of the former was a strong-minded yoga gymnosophist with firm standpoint, who brought numerous supreme Tantric Hinduism to the snowy highland, offering boundless beneficence to Tibetan Buddhism and the Kagyu Sect.

Milarepa, the disciple of Marba, however, was an achievement master. Being an apotheosis for all gymnosophists, he was regarded as the first generation Buddha through religious cultivation, holding a grand position in the hearts of the faithful believers.

Moreover, Dagpo Lhajay, Milarepa’s disciple taught by his spirit, who was highly praised as the shining sun in the sky, carried forward the tenets of the Kagyu Sect and cultivated numerous outstanding disciples, making the reputation of the Kagyu Sect well-known in the snowfield.

Kagyu monasteries are mostly in Kham, eastern Tibet. Tsurphu and Ralung are in central Tibet:

Qiongbulangjuepa is a former Tibetan of Nimu Reman and his family belongs to Qiongbu. He studied Bon religion at a young age, and later learned the Dzogchen Heart Department of the Nyingma School. After that, he took Duojin to Nepal, where he learned Panzhi Da Pasumadi to learn about Ze. Went to India to give the novice monk ordination at the Vajra-sha of Izhan Nalanda Monastery. The good knowledge he relied on was about a hundred people. Among them, the two great dakinis, Nikumar and Sukarsenti, learned the novice ordination. “Fire” and other six methods. He also learned the Mahamudra from Maitreya. After returning to Tibet, according to the Kadam Sect Langri Tangpa Shou Bhikkhu Rong, he lived in the basin of Jubo Mountain to practice the road. After that, he built a 108 monastery headed by Xiongxiong Temple in the Xiang area of ​​Yeru, Hou Tibet, and gathered disciples to preach the Dharma and preach. His inheritance is called the Shangpa Kagyu Sect.   He has the most disciples. The first one is five people including Mai Udumba in the early stage, and in the later period he only chased one person by Mojupa Rinchenzun. He is the fourth generation to obtain a single pass of the Vajra’s secret sentence; after he passed away, his eldest disciple Ji Gamba Chhatti Sengge inherited the throne. Yoshioka first learned the enlightenment and teaching of Reqiongpa (1083-1161)’s disciple Zari Goumba. Later, I followed Mojuba as a teacher and learned from the incense school professors. The disciple of Jigampa, Ningdun Choki Sirata, was a contemporary of the Kadampa monk Kyung Ova (born in the 12th century AD). Ning Dun built a monastery in the Rigong where Qushui was in the former Tibetan area, so he was also called Rigongwa, and his inheritance system was called the Rigong system. The disciple of Ningdun was Sanggyed Dumba, who was contemporary with the Yang Gunpa (1213-1258) of the Zhigong line. The above is called the Seven Treasures of the Champagne School. Sangye Dumba used to be a single pass, but later became a universal pass after opening the law.

Dabrajie’s disciples are all Songqinpa (1110-1193), who are all Songdokang people, whose real name is Qudizapa, also known as Khamwsse. He first followed the Kadampa professor and Xianjiao big mudra by the disciple Viet Chowang of Atisha. In addition, according to Duo’s teacher’s learning and teaching the classics, when he was 30 years old, he saw Dabrajie to obtain the essentials of the big mudra. Then he went to Luoruo to pay homage to Reqiongpa, and learnt the “Six Laws” and the “Madhudha” taught by Narupa and Mairepa. In 1147, he established the Kamalading Monastery in Leiwuqi, Qamdo, as his residence. Later, Chupu Temple was built in the former Tibet, and the teachings were passed on by disciples, which gradually formed the Karma Kagyu Sect.    His setter disciple Sangjie Rechen, Sangjie disciple Bangzhapa, Bangzhaba disciple is Karmapakshi (1204-1283). Legend has it that Karma Pasig was the reincarnation of Dusongchenpa. Starting from Karma Pasig, the Living Buddha reincarnation system was established to inherit the throne. Later, two living Buddha systems, the black hat system and the red hat system, were introduced.   The third life of the Black Hat Living Buddha was Rangjiong Dorje (1284-1339). He had a disciple named Zaba Sengge (1283-1349) who was awarded the title of a national teacher in the Yuan Dynasty and bestowed the Red Riding Hood. Zhapa Sangha was reincarnated after his death, and the Red Riding Hood system of reincarnating living Buddhas has since been developed. The professors of the Karma School have guided the “Inconceivable”, “The Heart of the Wind”, “Four Essentials”, “Specifying the Three Kinds of Body”, “Very Deep Inner Righteousness” and so on. They guided the post-learning and formed the Karma Ka Give one example.

The Caiba school started when Dab’s disciple Zun chased Dhabha (1123-1194), when he was about 30 years old (1152), he resisted Dablazhe. After Dab gave his “Co-Born and Lawfulness”, Idab said His nephew Chu, Ningbu continued to learn the Dab Kagyu Dharma, and he also learned kindness, compassion, bodhicitta and other professors from Wokava. When he was 20 years old, he built a monastery in Cai Manor near Lhasa to teach the Dharma and accept his followers. Caiba’s important professor is “The Only White Method”. This method induces the insight of the original mind by the double movement of Ming and Kong, and relies on the “Convenient Way” to let the wind enter and dwell, and blend in the central channel to induce great happiness and become happy and empty. Big mudra of double luck. Other methods should be guided by “Study on Competition and Victory”, “Sacred Dharma-Secret Meaning and Interest” and so on. There are many disciples following the school, and this school’s inheritance system is called Caipa Kagyu. But after passing on for several generations, the Great Temple was destroyed by fire, and the Dharma vein gradually declined.

Begins with Baorongpa Dammawangchu, a disciple of Dabrajie, who was awarded the Master Handprint, and then he built Baorong Temple in northern Tibet, where he taught the real handprint of “Relting and Moving”, which is music. The empty big seal was changed to the “Law of Migration and Migration”. This method is designed for the inability to realize the truth of the mind. It is one of the methods that enables the Buddha’s power to transfer one’s mind and consciousness into the Buddha’s mind to rebirth and become a Buddha quickly. It was also reported that the “Single Pursuing Path” was a method of seeking enlightenment and seeing nature, and this school got its name. One of his disciples was Di Shi Reba who was quite famous.

The essentials of the Kagyupa

The scriptures and teachings of the Kagyupa come from India and are collectively referred to as the four major dictums. The professors of the Maba School of Linguistics include the “Mahamudra” and the “Six Laws of Narua”. The Tantra classics on which the “Six Laws” are based include the father’s continuation of “Fastness”, the mother’s continuation of “Mahamaya”, and the continuation of “Sheng Le”, “Hi King Kong”, “Fear King Kong”, “King Kong Dakin Mother”, “The Kalachakra”, other deities and protectors include “Six-armed Big Black Sky”, “Vajra Maid”, “Four Seats”, “Kuanyin Horsehead King Kong”, “Dharma Class of No Body”, “Mother Without My Mother” , “The Five Sisters of Zeren” and so on. The professors include: “Kabai”, “Relief Point”, “Sangbuza”, “Dukha Zang”, “Six Dharma Illusion Body”, “Six Dharma Dreamland Cultivation”, “Conscientious Change”. The Shangpa Kagyu is also inherited by lingo, so its continuation is the same as the Maba Kagyu. Its professors include “The Great Empowerment of the Phantom Body”, “The Five Teachings of the Dakaya”, “The Big Handprint Box”, “The Six Methods of Nicholas”, “The Way of the Phantom Body”, “The Immortal Chakra”, “Four Passes”, “Zhuan” For the Taoist, “Six-armed Big Black Sky”, “Sheng Le Five Sovereigns”, “The Secret Repair of Hai Mu”, “Avalokitesvara”, “Destroy the King Kong”, “Vajra Hand”, “Fudo Zun”, “Three “Body Revealed” and other empowerment edicts.    The continuations cited above and their explanations are numerous, and there are too many continuations, and there are too many to mention them. The above is only a summary. The righteousness of luck is also the central doctrine of the Kagyupa.