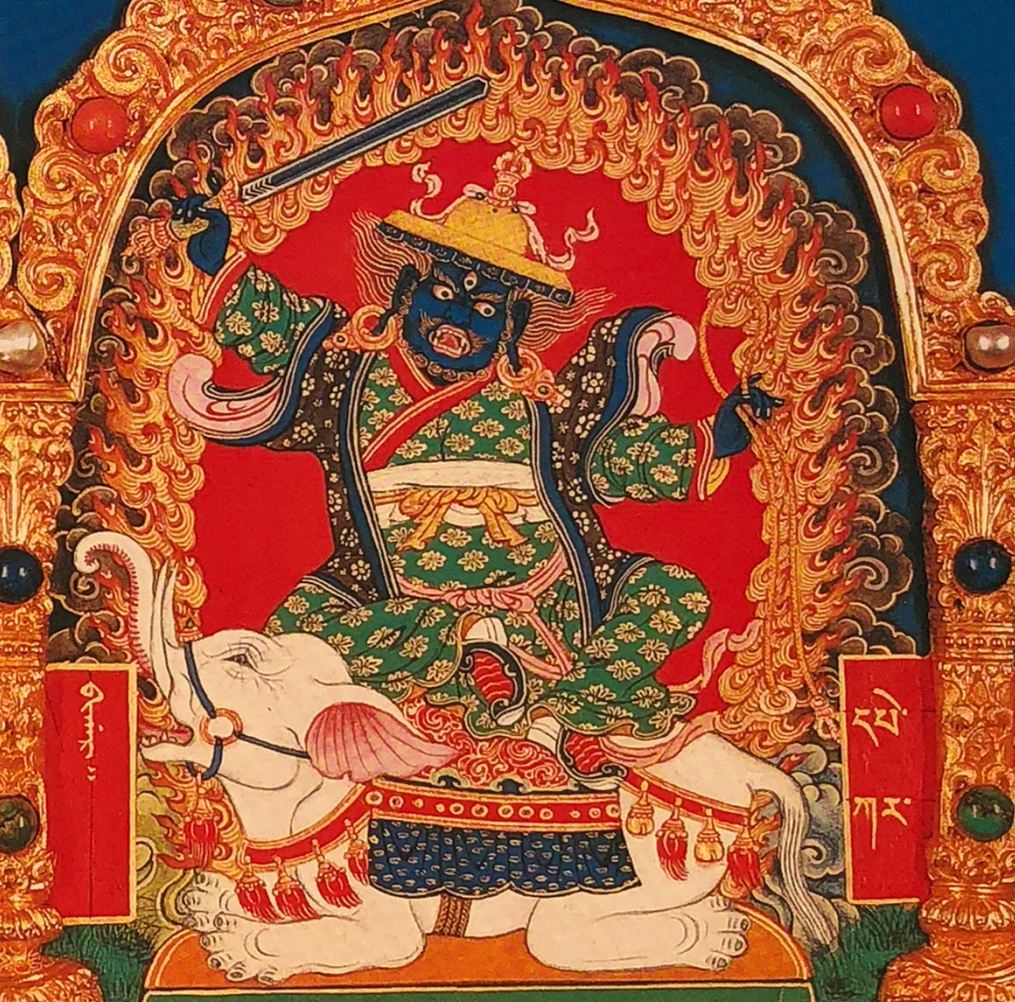 According to other Tibetan sources, it was Trisong detsen’s son and successor, Emperor Muney-tsenpo  (r. 797 – 800), who deputed the expedition to the Bhata Hor. The Tibetans appropriated these three objects, brought them to Tibet, and installed them in Samye.

Once, a casket drifting down the Kyichu River reached the neighbourhood of Drepung monastery. As it floated by, one of the four abbots spied it, and had the realization that Pehar was imprisoned in it. He ordered a priest to retrieve the casket and take it up to the monastery.

While the man was carrying the heavy container, his curiosity overwhelmed him and he set it down and opened it. Out fluttered a white dove which flew to perch in a birch tree, but then it vanished from sight.

At the time of the Third Dalai Lama, Sonam-gyatso  (1543-1588), protector Pehar Gyalpo began manifesting as an oracle, speaking through a medium.

The Great Fifth Dalai Lama, Ngawang-lozang-gyatso (1617-1682), appointed protector Pehar Gyalpo as the State Oracle for the newly established Tibetan government and commissioned a new monastery, Nechung the Small Place, as the oracle’s seat. The monastery was completed for Pehar in 1683 and Pehar subsequently became popularly known as the “Nechung Oracle.”

Pehar, as a dharmapala, embodies the activities of the Five Buddhas.  He also has five aspects: Body, Mind, Speech, Knowledge and Activity.  The Mind aspect of King Pehar (Tuk ki Gyalpo) is brown with one face and two arms. His right hand holds a red spear, his left, a double-edged sword and a lasso.  He wears a bear skin shawl and a black turban and is seated on an elephant amidst fire.

The Body aspect of Pehar (Kui Gyalpo) is dark blue, with one face and two arms. His right hand holds a vajra and his left, a single cymbal.  He wears a round golden cymbal-shaped hat (tipshu) and rides a black bear.

The Knowledge aspect (Yonten kyi Gyalpo) is black, with one face and two arms. His right hand holds an axe, his left a demon’s lasso.  He wears a tiger skin shawl and a black snakeskin and rides a dragon.

The Speech aspect (Sung gi Gyalpo) is dark brown, with one face and two arms. His right hand holds a staff, his left a sandalwood club.  He wears a black robe and rides an iron wolf.

The Activity aspect (Thinley gyi Gyalpo) is navy blue with three faces and six arms.  His first right hand holds a hook, the second an arrow, and the third, a sword. His first left hand holds a razor-sharp knife, the second a bow, the third a staff.  He wears his tipshu, a white shawl and leopard-skin skirt, and rides a snow lion. 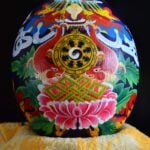