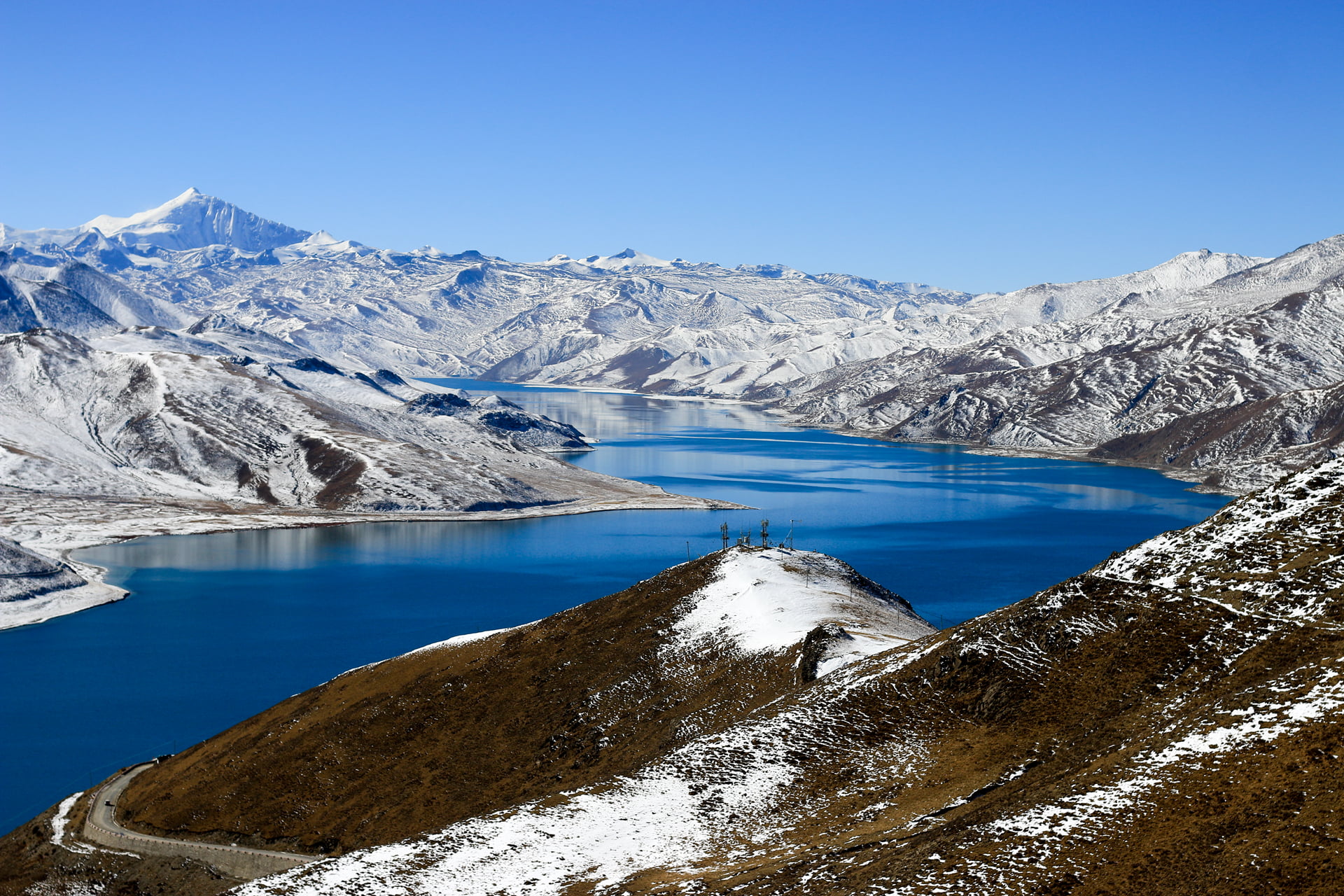 Yamdrok Yumtso is an outflowing lake which is connected with the Yarlung Tsangpo River. About 1 million years ago, huge mud-rock flow blocked the river valley in the upper reaches of the Moqu River nearYangse which is about 20 kilometers west from Baidi and the lake became a continental lake.

Yamdrok Yumtso takes a shape of paper fan and stretches roughly from northwest to southeast, while the south is wide and the north is narrow. Along the lake, there are many branches of the lake winding their way into the mountains. There is lush pasture around the lake with an area of 10 million square hectares and is one of the most famous pasturelands in Tibet.

Yamdrok Yumtso has an elegant view and it is said that a fairy maiden left the Heaven and turned into the lake on earth. There are more than 10 islands in the lake, the large ones can hold 5 to 6 households while the small ones are only 100 square meters or so.

Yamdrok Yumtso is a salt lake of low consistency and it begins to freeze every mid-November and the ice can be as thick as 0.5 meter. The lake abounds in small scale fishes, Tibetan fish,plateau carps etc, with an yearly production about 200 to 300 million kilograms. The fish breeding business has been flourishing and taken a large scale. The fish is not only sold in Lhasa but also in inland market. Here is also the largest habitat for water birds in north Tibet. Every winter flocks of birds are flying here from the south. Along the banks and on the islands there are large numbers of swans, pigeons, yellow ducks, cormorants and barhead goose. It will cost you 30 minutes to go down the pass to Yamdrok Yumtso, then you can enjoy the views on the road along the lake. After driving 60 kilometers until you reach Nankartse County, the lake will disappear slowly from your eyesight. Follow this road and pass Nankartse County, you will reach the nearby the Lhagyari Manor about 40 kilometers from there.

Yamdrok Yumtso is rich in hydroelectric power. There is a mountain which blocks Yamdrok Yumtso and the Yarlung Tsangpo River, the nearest point is only 6 kilometers far. The surface of the lake on the south side of the mountain is 4,441 meters above sea level and only 3,570 meters on the north side, which falls over 800meters. People are making full use of this natural high peak and building a Hydroelectric Power Station on the roof of the world. After its construction, it will play a measureless role in promoting Tibetan economy.

It lies within the boundary of Nankartse county, on the north bank of the Yarlung Tsangpo River, Lhokha Prefecture, surrounded by mountains.

You may take a bus or rent a car in Lhasa and it costs you two hours to cover the 100 kilometers distance. If you go by bus, you may stop at the Great Bridge of the Yarlung Tsangpo River, then visit Yamdrok Yumtso by Taxi. Renting a jeep for six people may cost you 1,500 to 2,000 Yuan a day.

Beautiful Holy lake which everybody is looking forward to.

Summary: “Yam” means the “upper”, “drok” means “pastureland”, “Yum” means “jade” and “tso” means “lake” in Tibetan. So Yamdrok Yumtso means “the jade lake in the upper pastureland” or “swan lake” in Tibetan. With an altitude of 4,441 meters, Lake Yamdrok Yumtso is 130 kilometers long from east to west and 70 kilometers wide from north to south and covering an area of 638 square kilometers. It enjoys equal popularity with Lake Namtso in North Tibet and Lake Manasarovar in Ali, which are called “three Holy Lakes” in Tibetan Plateau. It’s a continental lake supplied with rain, thawing snow and icebergs.